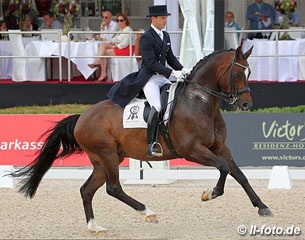 The Spanish equestrian federation and Luis Lucio, the Technical Director for dressage, have announced the team that will represent Spain at the 2014 World Equestrian Games in Caen, France, on 25 - 29 August 2014. Rafael Soto will be overseeing the Spanish team with coaching advice.

There was no reserve rider announced.