Christian Carde: Where Did the Halt Go? 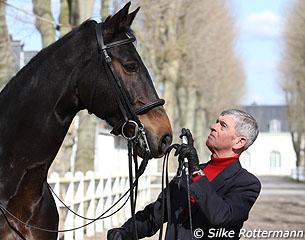 Our guest columnist of the week is Colonel Christian Carde, retired French I-judge, former French national coach and former chief rider of the Cadre Noir in Saumur, France.  The recent CDIO Aachen classes prompted  Col. Carde to share a few thoughts and his doubts on the judging of the 'halt ' and beyond.

Where Did the Halt Go?

At Aachen, like always, the best dressage horses and riders in the world were judged by the best qualified judges. All will meet again at the 2014 World Equestrian Games in France at the end of August: the riders will try to get the best possible results, the judges will determine these based on the shown performances.

As expected the marks obtained by the best combinations at Aachen were very high. Does this automatically mean that they were justified? This is not sure and to me it seems important to share a few thoughts with you regarding the way the halt has been marked. It's only one example of several movements of which the judging has become puzzling and problematic.

The FEI dressage rule book is very clear on how single movements, including the halt, should look like. Let me remind you of the key elements:

These clear requirements of the rule book have undeniably not been seen with many of the top ten placed horses in the Grand Prix Special at Aachen. May it be on photos or films, one can clearly recognize that these horses halted more or less on their shoulders, the hind legs stretched out and the head often in a deep neck position. This is definitely the opposite of the ideal halt which one wants to see at this level of competition, including overscored halts at Aachen.

Does this need to be disturbing? Do we need to worry about mediocre and bad halts at international level ? I think so for several reasons.

The halt seems to be a banal movement to watch, but for the attentive spectator it is not. The halt is significant for the way riders obtain collection. The good halt is the first step towards collection, because the horse takes weight on the hind-legs and lighten the forehand. A good halt is an important indication of the quality of training. 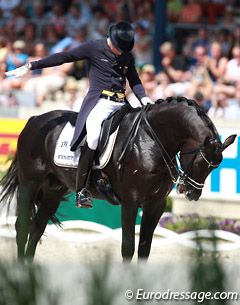 The most important fact to notice about badly executed movements at the highest level in general is how judges assess them. The obvious aim for judges is to provide a correct ranking of the riders according to execution of the movements in a test. By ranking these riders competition after competition, judges give direction to the development of dressage world-wide. Riders and trainers all over the world logically are looking at the technical execution and training of the horse of those rider who are winning and placing highly. It is completely natural that other riders try to imitate those at the top and want to learn from their style of equitation, because it leads to what everybody is thriving for, success.

Dressage champions are great examples that stimulate the sport to greater levels. Judges are aware that they are the ones who indicate the boundaries between good and bad riding, between right and wrong training. Their responsibility is great. Unfortunately, the judges' panel seemed to have lost touch with this responsibility if one looks closely at how several halts were marked at Aachen. Faulty executed halts were often acknowledged with marks between 7 and 9 when they should not have been awarded more than a 4 due to the reasons mentioned above.

The trend to mark mediocre or even bad movements highly if they are shown by the right "names" in the sport is a complex and very serious problem for the discipline of dressage. It endangers the principles of the sport, the principles which according to the FEI rule-book should be preserved, upheld and celebrated.

It seems hard to believe that judges don't see mistakes like the ones in the halt.
The conclusion has to be that they don't consider them very seriously. And this fact deserves some reflexion.