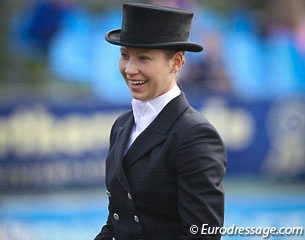 Briana Burgess has won her appeal against the 2014 Australian WEG Team selection and secured a spot back on the team if her horse La Scala passes a vet check on 11 August 2014. If La Scala is deemed fit, Maree Tomkinson will lose her spot on the team.

An EA Appeals board met in Sydney today to hear the appeal lodged by dressage rider Briana Burgess in relation to her non-nomination to Australia’s dressage team for the 2014 World Equestrian Games (WEG).

Equestrian Australia (EA) can advise that the appeals board has upheld Burgess’ appeal and has directed the Dressage Selection Panel (DSP) to confirm Burgess and La Scala as the third ranked combination in Australia’s dressage ranking list.

In accordance with Equestrian Australia’s WEG selection policy for dressage, at the end of the two round nomination series the top four combinations on the dressage ranking list are to comprise the Australian team for the Games, however Burgess only contested the first of two events due to soundness issues relating to her horse.

Burgess applied to Australia’s Dressage Selection Panel (DSP) requesting the panel give discretionary weight to extraordinary factors and permit her to count the single score obtained at the first nomination event in the final ranking list.

The DSP granted this request however removed La Scala from the team, in accordance with section 7.3.1 of the selection policy, after considering the veterinary advice that was available to them at the time.

The appeals board has directed the Dressage Selection Panel (DSP) to reverse its decision to remove the combination from the team on the basis of it not being able to perform to a required standard.

The Australian Dressage Team is as follows:

Should La Scala not pass the veterinary assessment the team will remain as it was selected on 29 July 2014.

Equestrian Australia Chairman Dr Warwick Vale applauded all parties for maintaining a high level of professionalism throughout the process.

“Given the uncertainty surrounding the soundness of Briana Burgess’ horse at the time of team nominations this was always going to be difficult situation for dressage selectors. The manner in which they have conducted themselves throughout this process is commendable and we applaud their integrity and professionalism. I would also like to acknowledge the riders who have also remained professional and courteous throughout the process. To see this appeal promptly heard and resolved within a week from when it was lodged speaks volumes of the effectiveness of Equestrian Australia’s processes,” Dr Vale said.