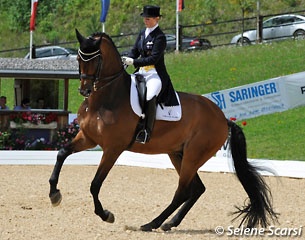 Australian Dressage Selectors have confirmed Australia's Dressage Team for the 2014 World Equestrian Games held in Caen, France, on 25 - 29 August 2014.  The only four combinations which competed at both mandatory European WEG selection trials in Fritzens and Deauville have been nominated on the Australian dressage team.

In making its decision the Dressage Selection Panel (DSP) considered formal applications from Briana Burgess and Kristy Oatley who requested the panel give discretionary weight to extraordinary factors applying to their horses (as per clause 7.1 of the selection policy).

Burgess’ horse La Scala and Kristy’s horse Louisa did not take part in the weekend’s second nomination event in Deauville (France) due to soundness issues.

Each rider’s application was considered and granted by the DSP thereby permitting each rider to count the single score obtained at the first nomination event in Fritzens (Austria) in the final dressage ranking list.

With section 2.3 of the selection policy calling for the nomination of Australia’s dressage team on or before 29 July 2014, the DSP has considered the assessment report on La Scala, prepared by Australian team vets. In accordance with section 7.3.1 of the selection policy, athletes who, by reason of illness, injury or soundness problems to either their horse or themselves are unable to perform to the required standard as determined by the DSP (after having received advice from the Team Vet) may be removed from the WEG team.

In selecting the team’s reserves the DSP is considering the extraordinary factors and will make this announcement on or before 14 August 2014.