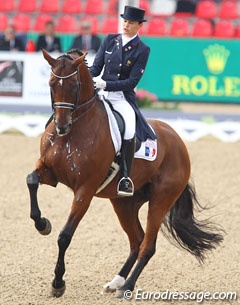 The French equestrian federation with Jan Bemelmans as team trainer, Alain Francqueville as chef d'equipe and Emmanuelle Schramm as Technical Director have selected the team that will represent France on home turf at the 2014 World Equestrian Games in Caen, France, on 25 - 29 August 2014.

The CDI Deauville last weekend was the final observation trial for the French WEG team contenders. Originally the team would not be announced before the definitive date of 14 August, but at Deauville the cards were clearly shaken with a group of four scoring strongly.

The French team selected to compete at the Games includes:

The five selected riders will all go into training camp together, but Henry will only travel to Caen in case he needs to substitute a pair.