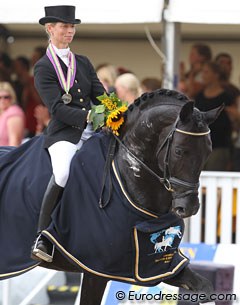 German young horse trainer Eva Möller has been invited as guest judge rider for the 2014 Pavo Cup Finals which are held during the KWPN Horse Days in Ermelo, The Netherlands, on Thursday 14 August 2014.

Moller (née Nolden) works in Germany at the prestigious of Kasselmann in Hagen and is married the yard's dressage director Dr. Ulf Möller. Eva is a multiple World Young Horse Champion and medalist and has already served as test rider for the Pavo Cup Finals in 2012.

The three best scoring horses after the first round of Finals on 14 August will be test ridden by Möller for the rideability and potential score.