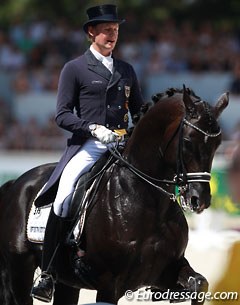 (CHIO Aachen press release) His comeback becomes more impressive from ride to ride: In the Grand Prix Spécial of the CDIO-Tour Matthias Alexander Rath and the Dutch stallion Totilas danced to victory. Totilas once again beat Valegro and the Olympic gold medallist, Charlotte Dujardin. Last year's winner Helen Langehanenberg with Damon Hill and Isabell Werth with Bella Rose completed the outstanding overall German outcome, by coming third and fourth respectively. Rath and Totilas will be disappointing many fans as the dressage committee of the German Olympic Equestrian Committee approved to withdraw Totilas from Sunday's highlight class, the kur to music!

Monica Theodorescu was visibly delighted at her team's fantastic results. "Our four riders were simply sensational," stated the German National Coach. Particularly, the "prodical son" who was lost for two years, put in a further convincing appearance in the first-class Grand Prix Spécial. Due to injury, the pair had been out of action. The pair impressed the spectators more than ever in this wonderful setting at the Aachener Soers. After the final salute of the 29-year-old from Kronberg, the crowd jumped up from their seats. Rath kept on pointing at his stallion, as if to say: "He deserves the applause."

That Matthias Alexander Rath and Totilas' series of wins – since returning to the competition circuit they have won each test – would just carry on an on here in Aachen, was by no means matter of course. The competition couldn't have been tougher – after all Dujardin and Valegro hold the records in all of the advanced dressage test. But once again the Germans rose above themselves. The German squad member steered the 14-year-old Gribaldi son through the dressage arena in the Deutsche Bank Stadium without hardly making a mistake. There was just a slight backwards tendency in the piaffe – which was immediately accompanied by a groan from the crowd. Straight afterwards though, the duo mustered up their entire concentration and performed the remaining exercises immaculately. The result: 84.549 percent. Dujardin, who already had slight problems with the flying changes in the Grand Prix, finished on a total score of 83.157 percent. 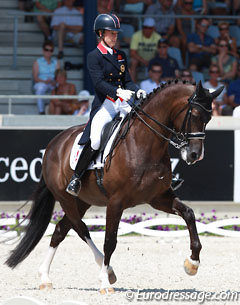 Ann Kathrin Linsenhoff, co-owner of Totilas together with Paul Schockemöhle, was delighted about the victory of her son-in-law: "That everything is going so smoothly for Matthias and Totilas here is fantastic. It has been a difficult two years. It is wonderful that Matthias had the staying power.“ The National Coach Theodorescu shared her opinion. "That was fabulous today. Not only Totilas, but also our other horses convinced me. All of them improved their performances compared to the Grand Prix."

Damon Hill and Helen Langehanenberg's performance in the Grand Prix Special was equally convincing. The 14-year-old stallion stumbled briefly in the extended trot on the diagonal, but apart from that, the whole test was immaculate (82.078 percent, third place). Isabell Werth and her 10-year-old aspiring talent, Bella Rose, followed in fourth place (81.471). The good spirited 44-year-old made the following comment regarding the mistake in the two-tempi flying changes: "Her time will come." Isabell Werth is convinced that the future belongs to this elegant Westphalian-bred mare, a Belissimo-daughter. "Provided that she stays fit, of course."

The Swedish rider Tinne Vilhelmson-Silfven claimed fifth place with the Hanoverian gelding Don Auriello (79.039). Kristina Sprehe and Desperados, who didn't perform as well as they can in the Grand Prix, came into their own in the Spécial. The pair completed all exercises without a mistake and excelled with their elegance: 79.039 percent (sixth place). 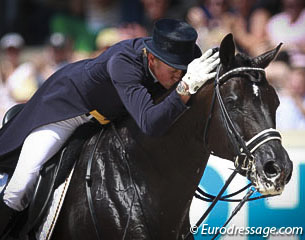 Tomorrow, on Sunday morning, the best 15 pairs will compete in the Freestyle. In a suprising and disappointing act from the dressage committee of the German Olympic Equestrian Committee (DOKR), Rath and Totilas were allowed to withdraw from competing in the Grand Prix Kur to Music finals. The 6,000 spectators that will come to the sell out stadium in Aachen will be saddened not to see the popular stallion compete. The DOKR stated that "the performances of this pair have improved impressively, show after show, with eight victories at four shows. Because the horse is still in the build-up phase, the committee believes an extra start is not ideal." While Totilas is allowed not to compete in the Kur, which is also according to the CDIO show FEI rules, the rest of the field will be competing in the finals. This field also includes fatigued 17-year old horses (from the 30° heat today), inexperienced 10-year old horses (young GP horses) as well as other WEG medal candidates from whom it could be a good strategy not to compete in the Kur in the lead up to the World Equestrian Games.

Photos © Astrid Appels / Eurodressage - - NO REPRODUCTION ALLOWED (NO FACEBOOK!! If you want to use the photo, buy it)

Eurodressage's Astrid Appels was on the scene taking photos of all CDIO Riders in Aachen. Contact us if you are interested in photo prints, collages or albums.