Valenta Out, Lorenz In for 2014 European Young Riders Championships 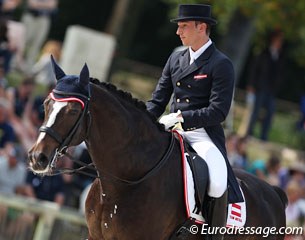 The Austrian teams competing at the 2014 European Junior/Young Riders Championships are plagued by more health issues. After junior Nicola Ahorner dropped out, young rider Oliver Valenta also had to withdraw from competing in Arezzo on 9 - 13 July 2014.

Junior Nicole Ahorner's Robbespiere became unlevel last Saturday on the day of departure to Arezzo, and was forced to drop out of the team. She will not be replaced and Austria will be sending a team of three to Italy.

Valenta's spot will be taken by Florian Lorenz and his 14-year old Holsteiner Luigi (by Lavaletto x Calvadur), who were members of the 2013 Austrian European Championship team.  Lorenz will be joining team members Karoline Valenta, Franziska Fries, and Lea Pointinger.