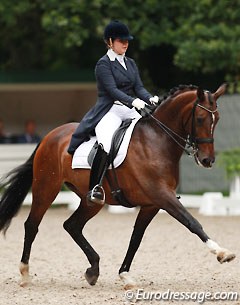 The French equestrian federation has announced the teams that will represent France at the 2014 European Junior and Young Riders Championships which take place next week in Arezzo, Italy, on 9 - 13 July 2014. The selected team riders met on 28 - 30 June at the training camp in Lamotte-Beuvron.

The training camp was led by French youth team trainer Ralph Michael Rash and chef d'equipe Muriel Leonardi. The eight team riders gathered there for a general training session on the first day, followed by a test riding day on Saturday and a theoretical class by Rash. On Sunday there was a final training with a focus on improving the weak points.

"We're satisfied with the camp and the last day during which the horses showed improved form," Leonardi commented. "The two teams are very homogeneous on a technical level. The camp took place in a very relaxed atmosphere and the riders were very motivated."

The French teams for Arezzo are:

The junior reserve is Céline Brauns on Weltrubin