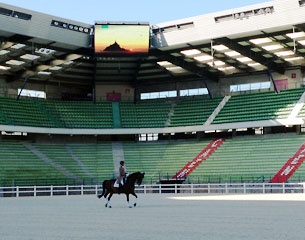 The FEI will be staging a test event in the form of a CDI 3* at the D'Ornano stadium in Caen, France, on 23 - 26 June 2014, where the 2014 World Equestrian Games will take place at the end of August. The footing for show jumping and dressage has been placed in the stadium and the arena is now ready.

Just like the test events of August 2013 (which included Eventing, Endurance and Driving), the CDI 3* is not a rehearsal for the main event, but rather a simulation enabling the Organising Committee to move forward. The event will also enable the national federations to discover d'Ornano stadium in its equestrian configuration for the first time, and to enter into discussion with the Organising Committee, in order to get ready for the final weeks.

Laurent Cellier, Sports Director of the WEG Organising Committee, explains the decision to stage the test event on weekdays.  “We were keen not to stage our events on dates overlapping an historic competition like Rotterdam."

Numerous countries will be represented during these 4 days, including: Australia, Canada, South Africa, Israel, Colombia, Chile, Palestine, Japan, Korea, the United States as well as Venezuela. The French and European riders will also be present of course!

For the dressage test event 19 athletes from 12 nations are enrolled in this competition. Among them, a few "stars" such as Carl Hester (GBR) and Gareth Hughes. Nathalie Zu Sayn Wittgenstein (DEN) will compete Fabienne. The Spanish team will be well represented with four combination in action, while France is sending Julia Chevanne on Luciano and Alizee Froment on her new horse Ehrendorf. German born Palestinian Christian Bruhe, who is already qualified for the 2014 World Equestrian Games, will test the footing aboard his top horse Cinco de Mayo.