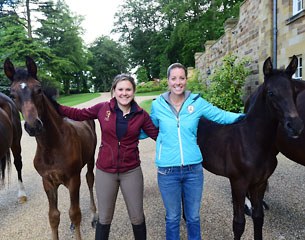 Hoping to turn these exquisitely bred foals into future British dressage stars, MSJ Charmer is a bright bay colt by the stallion Charmeur out of Dorina, who is by Danone x Royal Diamond (from the DeBaey breeding programme). Charlotte chose him as he is “full of presence with a kind but cheeky character with incredible paces and an enormous canter.”

The second colt MSJ Smartini, named so by Charlotte’s fans, is by Negro out of Tia Roma, who is by Donnerhall x Rubinstein (from the Harli Saifert breeding programme).

“He is stunning and was born the morning Valegro and I won the World Cup Final in Lyon so hoping that’s a lucky sign!,"said Dujardin.

‘Smartie’ is very elegant with three super paces and a twin from one embryo flush last year. His full sister, born less than 48 hours later, will be retained by Mount St John for sport and breeding. Both of the mares are from some of the best considered German breeding programmes of all time.

Charlotte Dujardin said “I am so thrilled with the two foals and thank Emma and all the incredible team at Mount St John for breeding these wonderful colts, to which I look forward to producing and hopefully becoming future stars of British Dressage”

Emma Blundell, director of Mount St John, said “we are delighted and honoured to be working with Charlotte and hope that we have a long and successful business relationship producing lots more champions in the future!”