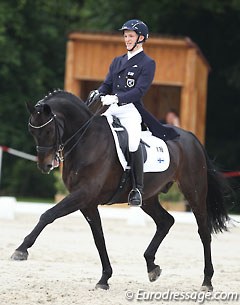 The Finnish equestrian federation will be sending a team of four riders to the 2014 European Young Riders Championships held in Arezzo, Italy, on 11 - 15 July 2014.  This is the first time since 2011 that Finland is able to field a team again at such a major international youth riders championship.

Von Staff-Reitzenstein, Salminen and Tanhuanpaa are confirmed a spot on the Euro-team and will also compete at the Nordic Baltic Championships. At the Finnish Championship it will be decided if Vilja Hukkine with Recidee will also join the Euro-team.

Finnish young rider team trainer Marko Bjors commented that Vilja Hukkinen's horse Recidee has to confirm fitness at the Nationals as the horse had to withdraw from the CDI Ypaja because it was a bit tender on the feet after being shod.