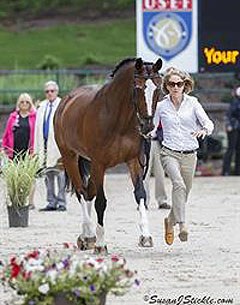 The focus of the American dressage world will turn to Gladstone, N.J., this week for the U.S. Dressage Festival of Champions 12 - 15 as it runs June at the USET Foundation Headquarters. The annual U.S. Dressage Championship will host the best American combinations across six divisions of competition.

The Grand Prix competition will be doubly important as it will serve as a Selection Trial for the U.S. Dressage Team Short List for the 2014 World Equestrian Games.

A field of 16 lines up in the Grand Prix Championship and WEG Selection Trial, which gets underway on Thursday, as combinations will earn the first 45% of their championships score in the FEI Grand Prix Test. They return on Saturday to contest the Grand Prix Special, earning a further 40%. Grand Prix competition comes to a close on Sunday with the Freestyles, as competitors earn the remaining 15% of their overall scores.

Arlene Page (Wellington, Fla.) brings her own Alina to Gladstone after having spent part of the 2014 season competing in Europe on a USEF Dressage High Performance Pre-Games Training and Competition Grant.

The Intermediaire I Championship

The 2013 champions have come to the historic USET Foundation Headquarters looking to retain their title. Kim Herslow (Stockton, N.J.) and Kiroli Enterprises Inc.’s Rosmarin will look to display the form that led them to a sweep of Small Tour competition at 2013’s Dressage at Devon.

The Reserve Champions from 2013, Rachel Chowanec (Columbia, Conn.) and Lendon Gray’s Embrujado XI, will head down centerline looking to top the standings this week.

In the Young Rider Championship, a talented field of 10 riders, all under the age of 21, have traveled to Gladstone to stake their claims on one of the most prestigious honors a young rider can garner. On Friday they begin performing the Young Rider Team Test and return the following day to ride the Young Rider Individual Test. Both tests will count for 50% of the championship average.

Anna Buffini has traveled to New Jersey from her home base in Escondido, Calif., with her own Sundayboy, who competed in Small Tour competition with Olympian Guenter Seidel, to showcase the talent that has seen them rise to the top of the 2014 Young Rider Dressage National Championship Ranking List.

Twelve of the top junior riders from across the United States will line up to earn bragging rights in the Junior Dressage National Championship by contesting the Junior Team Test for 50% of their score on Friday. Competition comes to a close on Saturday as they return to the arena to ride the Individual Test for the remaining half of their score.

The 2013 Champion Bebe Davis (Bedminster, N.J.) returns to the Festival of Champions with her partner at last year’s championship, Michael Davis’ Rotano, as well as a new mount this year, Michael Davis’ Feivel Mousekewitz, both of whom she has found great success with in the competition arena. Allison Cyprus (Magnolia, Texas) hopes to find success once more in Gladstone after winning the 2011 National Pony Rider  Championship at the famous venue. In her first year competing at the Junior level, she and her mother Kristin Cyprus’ Madoc Gareth have found great success.

A field of 11 will compete in the Pony Rider Championship. On Friday the riders will perform the Pony Team Test for the first 50% of their overall championship score, while the remaining 50% from the  Pony Individual Test will determine the winner.

Emma Patterson (Houston, Texas), winner of the 2012 13-and-Under USEF Dressage Seat Medal Final, will ride her own Wynshire’s Valiant and hope to find success in another USEF National Championship.