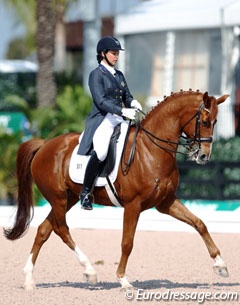 The United States Equestrian Federation has updated the U.S. Dressage Team for the 2014 Rotterdam CDIO5* taking place during the CHIO Rotterdam in Rotterdam, The Netherlands, June 18-22. Catherine Haddad-Staller has been added to the team, and Devon Kane has withdrawn Diamante Farms’ Destiny for veterinary reasons.

Kane's bay Danish warmblood Destiny (by Diamond Hit x Rubinstein) failed the vet check at the CDI Munich last Wednesday as she had sustained a minor injury in the warm up. Kane is currently in Europe training with Hubertus Schmidt in Paderborn, Germany.

Haddad-Staller has represented the U.S. at two FEI World Cup Finals and competed extensively in Europe while living in Germany for 20 years. In 2013, she rode Mane Stream Hotmail to a second-place finish in the Grand Prix Special CDI-W at Dressage at Devon. This year, the pair won the Grand Prix during weeks one and five of the Adequan Global Dressage Festival.

She will join Susie Dutta and Brian Hafner on the U.S. team in Rotterdam where the U.S. will also be represented by Mackinzie Pooley in the CDI-U25 competition.

Currently based in Europe, Dutta and Haddad have both chosen not to return to the U.S. to ride the WEG Selection Trials in June.