Plage and D'Arcis Resign from Position at Swiss Equestrian Federation 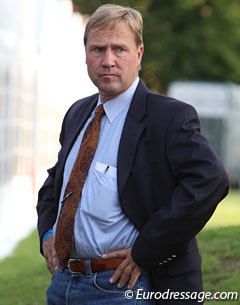 D'Arcis sent an email to all elite squad members in which he announced his sudden resignation. He stated that "profound differences in opinion" with the Swiss federation's head of the disciplines, Martin Walther, is the cause for his departure. Pläge has not provided a reason for his resignation.

Swiss equestrian publication Pferdonline contacted Walther for a reaction, but he refused to comment. "I cannot comment on both resignations. Please understand this," he said.

The cause for the acute resignation of two major dressage officials involves the planning for the World Equestrian Games in Normandy and starting spots at the CDIO Aachen. As Switzerland is partner country of Aachen this year, it received an invitation to compete there three weeks ago. Three to four starting places were available, but the Swiss federation decided to send only their top rider Marcela Krinke-Susmelj.

This is not the first time that the Swiss federation has not been supporting a team of riders but preferring individual instead. See the related links below.

The Swiss elite squad has thirteen riders in total.