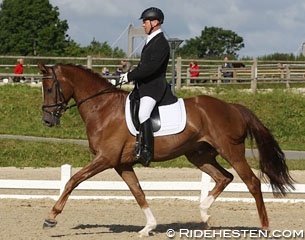 Eight horses made it onto the long list at the first Danish observation trial for team selection for the 2014 World Championships for Young Dressage Horses in Verden, Germany. The first Danish selection event took place in Vilhelmsborg on 3 May 2014. Three 5-year olds and five 6-year olds made the cut.

Judge Birthy Lyder assessed the 5 and 6-year old youngsters, which executed the young horse test. Afterwards the rider received a written commentary as well as had a personal moment with the judge during which she explained herself and gave suggestions for training.

The first Danish youngsters selected on the long list are: