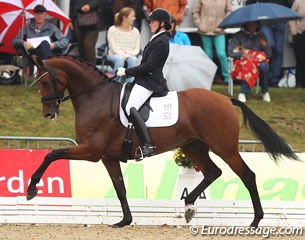 As of 2014, the Danish Equestrian Federation and Danish warmblood society have revamped their selection system for picking horses to represent Denmark at the 2014 World Championships for Young Dressage Horses in Verden, Germany.

In the past, Denmark would hold three selection competitions and a finals, where the top ranked horse and rider combinations could qualify on the team. This year, this system has changed moving away from the competition format towards a training and observation format, like the Dutch system.

The first two weekend of May to observation trials are held in Vilhelmson and Skaelskoer, Denmark. Here combinations can qualify for the long list after being assessed by selection committee members and judges Birthe Lyder and Susanne Baarup.

Another group of horses, that already stood out last year at the national championships or World Young Horse Championships have been invited to the long list straight away.

Once the long list is completes by the middle of May, three observation and selection sessions will be held in Vilhelmsborg on 17 and 31 May and on 14 June 2014. Horses will be assessed there by the selection committee supported by trainer Finn Greve. By the third observation trial, the long list will be reduced to a short list of 8 combinations from which the actual Danish team for Verden will be picked.