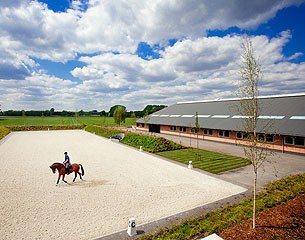 In the lead up to the 2014 World Equestrian Games the U.S. Dressage Team announce will be holding its pre-Games training at Rob van Puijenbroek’s equestrian centre De Begijnhoeve in Retie, Belgium.

Following the Selection Trial for the 2014 World Equestrian Games U.S. Dressage Team Short List, which will be held in conjunction with the 2014 U.S. Dressage Festival of Champions, horse-and-rider combinations will travel to Europe and train out of the facility until the horses move to the Games venue in Normandy, France on August 21.

The Belgian based and Dutch owned Begijnhoeve has 29 luxurious stalls and eight paddocks. Additionally, the facility is a prime training location with both indoor and outdoor 20x60m riding arenas, a lunging paddock, and an indoor walker.

"The American squad is extremely grateful to Rob Van Puijenbroek for allowing us to use his gorgeous, state-of-the-art farm as our official European-base this summer. The fabulous stabling, beautiful indoor and outdoor arenas, and perfect footing will surely be an enormous benefit to our horses and riders during this crucial time between shows and before leaving for Normandy,” said U.S. Chef d’Equipe Robert Dover. “It simply could not be a better situation and I can only say ‘thank you again’ to Rob for his generosity!"

Related Links
Gestut Peterhof to Serve as German WEG Training Camp
A Morning Session with the Canadian WEG Hopeful Team
Canadian Pan Am Team on Training Camp in the U.S.A.