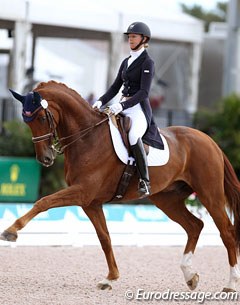 After a less successful show season in Florida the past four months, Blitz will give her top horse Paragon more time and prepare him for the 2016 Rio Olympics instead of pushing him now.

On the WEG Selection Trial Ranking List of 8 April, Blitz and Paragon were in 15th place with a Grand Prix scoring average of 68.160%.

After the 2012 Olympic Games, Blitz also took it easy with Paragon and rested him for the summer season of 2013.

"Once she picked up the reins again and because he’s a young horse he wasn't as strong as he needed to be to have many shows this winter in Wellington," Blitz' publicist told Eurodressage. "As a consequence he only did a few shows but it has not given him enough time to catch up and make a run at the qualifiers for WEG this summer because he would have to have been ready by the end of March."