Glock Buys Half Ownership in Johnson 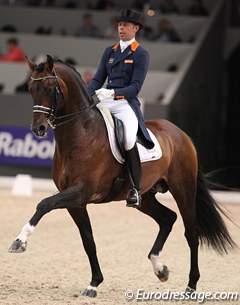 Johnson is by Jazz x Flemmingh x Sultan and was originally named Verdi. He was first licensed for the Oldenburg society, before becoming the 2005 KWPN Stallion Licensing Champion. He finished fourth in the 2007 KWPN Stallion Performance Testing.

Minderhoud has been riding the bay stalllion since he was three.  The pair finished 6th in the 5-year old division at the 2007 World Championships for Young Dressage Horses. At the moment the duo are submitted to the Dutch A-team and are ranked 35th on the FEI Dressage Riders' Ranking.

"It's a super solution," Minderhoud told De Hoefslag. "It was never Nijhof's intention to sell Johnson but you know how it goes when a horse starts to go well in competition. The phone rings after every show. Now all insecurity is gone. I'm super happy."

Glock has seven of its horses in training with Edward Gal and Hans Peter Minderhoud. They are Undercover, Voice, Tango, Romanov, Ziesto, Johnson, Lord of Loxley and youngsters Zonic and Casper.

Minderhoud will be representing The Netherlands with Johnson at next week's World Cup Finals in Lyon, France.