Bromont and Lexington In the Running to Host 2018 World Equestrian Games, Wellington Drops Out 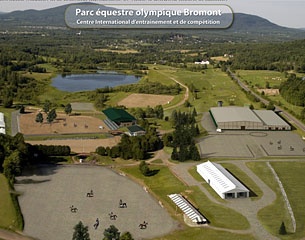 The FEI has received signed host agreements from two of the Canadian and US cities bidding to host the 2018 World Equestrian Games. The bid teams from Bromont/Montreal (CAN) and Lexington, Kentucky (USA) have both confirmed their continued interest in hosting the Games in 2018.

Lexington, host city for the Alltech FEI World Equestrian Games™ in 2010, returned the signed host agreement in advance of the deadline for receipt of the documentation, which expired at midnight CEST on 31 March 2014.

The Bromont/Montreal bid had previously submitted the required paperwork and did not need to resubmit, but Equine Canada’s new President, Al Patterson, has officially confirmed to the FEI that Bromont/Montreal will remain in the bid process.

Lexington, Bromont/Montreal, and Wellington, Florida (USA) had been declared as official candidate cities in December last year, and site visits of all three venues have recently been conducted by Tim Hadaway, FEI Director Games & Championships. However, Wellington withdrew from the bidding process just prior to the latest deadline in the bid process as Equestrian Sport Productions (ESP) was unable to deliver the commercial requirements put in place by the FEI.

“It is unfortunate that Wellington is unable to deliver on the commercial requirements and has had to withdraw,” FEI Secretary General Ingmar De Vos said, “but we are confident that both Bromont/Montreal and Lexington have very strong bids.

“Both venues are very impressive and there is no question that either of them would offer an excellent location and quality infrastructure for a really wonderful FEI World Equestrian Games in 2018. We are looking forward to the next stage in the process when the two candidates present their detailed bids to the FEI Bureau in June.”

Following submissions by the FEI’s Evaluation Commission to the FEI Bureau, the candidates will present their final bids to the Bureau at its in-person meeting in June 2014. The host city for the FEI World Equestrian Games™ 2018 will be announced after that meeting.