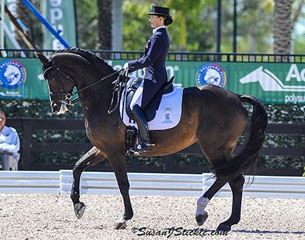 Mikala Munter Gundersen broke her streak of third place finishes with a victory on Thursday at the 2014 CDI-W Wellington on 13 March 2014. Gundersen and Janne Rumbough's My Lady finished first in the Grand Prix with a personal best score of 73.120%.

The week's feature event, the "Friday Night Stars" Grand Prix Freestyle CDI-W will take place on Friday, March 14, at 7:00 p.m. at The Stadium. An impressive fifteen horse and rider combinations are expected to take part in the class as every rider aims to earn valuable qualifying points for the 2014 World Cup Dressage Finals.

Gundersen topped an impressive field of 32 riders from eight countries around the world with My Lady, a 14-year-old Danish Warmblood mare  by Michellino. My Lady and Gundersen were the final pair to go, edging out fellow Dane Lars Petersen with a score of 73.120%. Petersen finished second with Mariett on a 72.700%, while American Catherine Haddad-Staller and Hotmail rounded out the top three with a 71.560%.

Five-star judge Dr. Wojtek Markowski (POL) was highly complementary of the class, describing the caliber of riders as greater than what he may see in Europe.

"I think this class was very good. You have top riders on the same level, so that was very interesting to see. This is promising in front of all the processes for selecting the members of the teams for the World Equestrian Games," Dr. Markowski explained.  "I think if I compare it to last year, the level [of competition] is much better. Together, all the riders did a very good job. It was nice to judge all of them. In Europe, not all the shows have a good class like we had today. Very often, we have less good riders. So that is promising for the riders who are based here from different nations."

Gundersen was ecstatic to break her "Yellow Lady" streak after placing third in seven out of her eight previous tests.

"I'm so happy! I'm really, really excited. I've had an amazing season. It's been so consistent and has slowly gotten better and better. I'm really, really happy," Gundersen beamed. "I'm very proud because it was a very big class. I was looking at the [start] list and I was like, 'Whoa.' I would have been happy if I was in the top six."

Gundersen admitted she hasn't been able to get in the saddle as much as she hoped to after injuring herself at the end of 2013, but the Wellington circuit full of CDI competitions has helped her and My Lady progress to a higher level.

"I think it's really important that we have all these shows, so we can have more and more experience. We have amazing judges coming in from Europe all the time, so we get great feedback. I think all of our horses have developed. All of the horses are just getting better and better throughout the season. It's very nice," Gundersen commented.

After finishing second two weeks ago in the World Cup Qualifier Grand Prix Freestyle, Gundersen felt My Lady had made marked development in her movements.

"My feeling in the tempi changes was really good. She has already really good changes, but it felt today like she was really jumping in them. I think I had some good piaffe work. Now, the piaffe is a double coefficient, so it's important that we have that and the transitions and everything come together. She felt better in her body overall," Gundersen explained.

"I showed the first three shows and then she had a month off, and I kind of felt that a little bit. I had little difficulties in thoroughness and my zig-zag, maybe my left pirouette and stuff like that a little bit," Petersen described.

Haddad-Staller may have finished third, but she counted Thursday's test as a win for Hotmail, who she described as having a "breakthrough" test.

"I've been building up the whole season for a test like that, and I hope to move past it for the next horse show. He's just going up, up, up, and it was not a surprise to me today that he did so well. The training in the last few weeks has just been fabulous with the horse, and I'm really happy," Haddad-Staller smiled.

Haddad-Staller also credited the string of CDIs hosted by the AGDF with her horse's development over the last several months.

"It's been a blessing to have a circuit like this in Wellington. Even in Europe, I could also do horse shows every second weekend if I wanted to, but I'd have to drive a long way," Haddad-Staller remarked. "You know what to expect every weekend, and you know your horse is going to perform every weekend on this footing, which is fantastic. The stabling is super safe. This stadium has a lot in common with the stadiums in Europe, so I think that this circuit of horse shows is also moving up in the world. It's been a real pleasure to be here this winter."

Later on Thursday, junior riders were out in full force to contest the Junior Team class. Paula Matute (ESP) topped the class aboard Firmamento Ymas on a score of 68.108%. American Bebe Davis finished second with Rotano on a score of 67.893%. Cassie Schmidt, also of the United States, was third with Velasquer after earning a score of 66.396%. Eight riders contested the class overall, the highest number of the Wellington season.