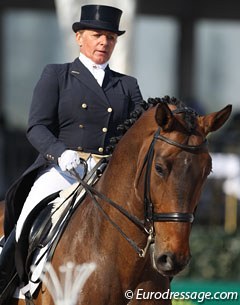 Canadian Evi Strasser besed the final class, the Intermediaire I Kur to Music, at the 2014 Palm Beach Dressage Derby in Wellington, Florida, on Sunday 2 March 2014. In a field of only three competitors, Strasser and Rigaudon Tyme scored 72.208%. Second place went to Austrian Gabriela Stumpf (AUT) and Finally Love, who finished with a 68.125%. Amy Walker-Basak (USA) and Wagner were third with a 64.917%.

Strasser's scores have steadily increased throughout the weekend before her win on Sunday. Strasser explained the trip to Wellington from Montreal, Canada, was a bit taxing on the horses, and she felt Rigaudon Tyme's fitness was finally back up to par this weekend.

"This weekend, he was already way more on the ball. It took us quite a while to come here from Montreal to Florida, and I think it took the [horses] a full four weeks to recover. I think they're just getting in shape, so I think next year we might have to come four weeks earlier!" Strasser smiled. "Every day, it got a little better. I took this time over the last two shows to build him up and get him settled more. I could feel that I could ride more and not overwhelm him. With horses that are almost doing the grand prix, it's always hard to ride a St. Georges because they are quicker than just an average St. Georges horse. They are way more alert."

Strasser was also pleased to see that her tweaks to the choreography of her freestyle had paid off. The music was originally tailored to another one of her horses, and Rigaudon Tyme's much larger gaits were causing the pair to either sacrifice quality or finish far ahead of the music. "I had to put in two more pirouettes, and it worked out very well. Finally, I got it the way I want it and he really was amazing to ride and just very powerful, so it was a lot of fun doing it," Strasser explained.

Strasser feels their music, which she arranged with the help of Karen Robinson, fits Rigaudon Tyme's large frame perfectly.

Strasser has brought Rigaudon Tyme (by Rosario) along since he was a three-year-old. Strasser usually buys prospects around that age before bringing them up through the ranks, an experience she describes as occasionally stressful, but incredibly rewarding.

Photos of the 2014 CDI-W Palm Beach Derby can be ordered by emailing us at info@eurodressage.com