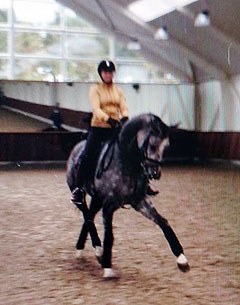 The grey mare is bred by Dr. Rupprecht Betz and was initially owned by Karl Dratva, before being discovered by Andreas Helgstrand in Bavaria.

She has been lightly competed in 2013 at A and L-level, first by Damaris Lelke and once by Ralf Kornprobst.

"She is a really wonderful mover," Alexandra told Eurodressage. "Andreas had bought her in Bavaria. When we saw her my parents wanted me to try her and here we are."

Alexandra Barbançon is aiming to qualify her Grand Prix horse Don Lorean for the Spanish team for the 2014 World Equestrian Games. She is trained in Denmark by Andreas Helgstrand and will compete Don Lorean at next week's 2014 CDI Doha (Qatar) and at the 2014 CDI Hagen in April.