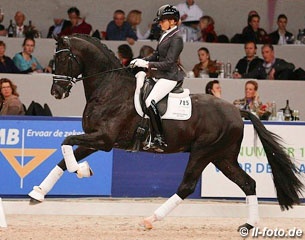 The winners of the KWPN Stallion Competition show circuit are decided by adding the points obtained at the qualifiers to the score achieved during the Finals.

In the L-level division for rising 5-year olds El Capone (by UB40 x OO Seven) became the overall winner with 359,5 points even though Expression (by Vivaldi x Vincent) was the high scorer in Den Bosch under Diederik van Silfhout. Expression finished on a score total of 350 points. Judges Mariette Sanders, Arie Hamoen and Jeroen Hulsman assessed the young stallions in Den Bosch. Kirsten Brouwer and Eye Catcher (by Vivaldi x Partout) finished third with a total of 332 points. British Olympian Carl Hester rode Everdale (by Lord Leatherdale x Negro) in the Finals, but he had his hands full with the stallion. The performance tester winner placed fourth, ahead of Emmelie Scholtens on Estoril (by Zhivago).

In the M-level division for rising 6-year olds Emmelie Scholtens and Desperado (by Vivaldi x Havidoff) were the undisputed winners of the Finals class as well as the overall ranking. The stallion scored nothing less than 9s for his basic gaits and reigned supreme. Scholtens and the chestnut stallion Dorado (by Krack C) finished second overall. Diederik van Silfhout and the dark bay Don Tango B (by Jazz x Contango) finished third in the overall ranking, but in the finals were bested by Gerdine Maree on Dream Boy (by Vivaldi x Ferro) as well as by Lotte Jansen on Dark President (by Wynton x Ramiro Z)

Only three horses contested the Z-level finals for rising 7-year olds with provisional ranking leader Capri Sonne not showing up for the Finals. Jose van Haaren and the black Cupido (by Daddy Cool x Jazz) excelled with his elasticity and uphill canter, but the stallion was quite tense throughout. Still he scored a total of 80 points in the Finals to win the overall ranking. Patrick van der Meer and the chestnut Chagall (by Jaz x De Niro) were the runner's up  followed by Belgian Tom Franckx on Charmingmood (by Winningmood x Contango)