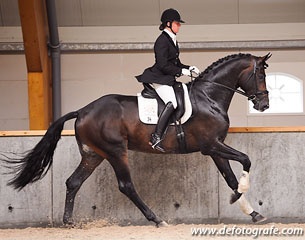 The KWPN society has decided to open up the Stallion Performance Test to 3 to 5 year olds who were not approved via the regular licensing process.

The stallion has to fulfil all the requirements of the first phase of the approval (conformation and veterinary standard) and has to have fulfilled the minimum requirement: either the first phase of the licensing or the stallion selection via the young horse competition (Pavo Cup), or the after-licensing under saddle. Four-year olds in sport have to be placed minimally L+2 and 5-year olds M+2.

The cost to test an "older" stallion is higher and if too many stallions are registered for the testing, the colts which completed the normal licensing process will get priority to participate in the testing.

These new criteria for the stallion performance testing which become effective as of March 2014.