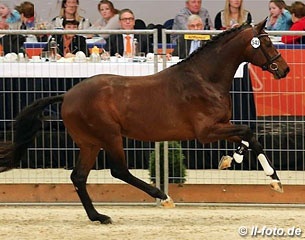 The KWPN licensing committee, consisting of Wim Ernes, Marian Dorresteijn and , selected 44 dressage bred colts for the third phase of the 2014 KWPN Stallion Licensing, which will take place in 's Hertogenbosch, The Netherlands, on Saturday 8 February 2014.

The KWPN Stallion Licensing consists of three phases. The first phase - the actual pre-selection - took place in December. The 79 dressage colts picked then were invited to the second phase today at the actual 2014 KWPN Licensing. The licensing committee made a drastic cut in that group  and has now selected a final 44 dressage colts which are in the running to be licensed tomorow.

The best producing sires were Apache (by UB40) and Jazz (by Cocktail), both with four sons selected for the third phase. Disappointing was the offspring of Andretti (by Special D x Sandro Hit) and the highly popular breeding stallion Charmeur (by Florencio). None of the Andretti sons passed for the third phase and only two Charmeurs are allowed to move onto the next phase (21 were entered for the pre-selection and only 5 made it to the second phase). The Dutch owned 2013 Trakehner Licensing champion Kissinger (by Singolo x Arogno) did not impress with his gaits, but was accepted for the third phase based on his genetics.

There were quite a few highlights in the collection and they are expected to be invited to the champion's ring (premium ring): he four accepted Jazz offspring excelled with their gaits, the Totilas offspring Governer STR out of a full sister of Parzival (by Jazz x Ulft) was a standout colt, Google (by Bordeaux x Johnson) moved with much potential and Genesis (by Lord Leatherdale x Metall) was a crowd favourite and made the audience clap.

The colts accepted for the third phase are: