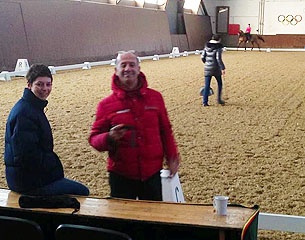 The German A-team dressage riders were invited to a two-day training seminar with team trainer Monica Theodorescu and staff members of the DOKR Dressage Selection Committee in Warendorf, Germany on 3 - 4 February 2014.

The "Championship" A-team riders attended the event devoted to training the horses, either riding full movements or parts of movements from the Grand Prix tests. Most of the training sessions were recorded on video and discussed afterwards. On Tuesday there was physiotherapy for the athletes followed by a strategy meeting duriong which the road to Caen was discussed with the riders.

During the strategy meeting Germany's road to the 2014 World Equestrian Games was discussed. The selection committee disclosed that scores from eight selected events will be taken into account for team selection. Two events are mandatory for the riders. The "observation trials" include:

In case a rider missed a selection event there will be a late selection opportunity for an "after-check" either at the CDN Munster or CDI Verden, both taking place on 7 - 10 August 2014.

The German WEG team will go into training camp at Arlette Jasper-Kohl's Gestut Peterhof in Perl-Borg on 17 August for five days. They will travel to France on 21 August.