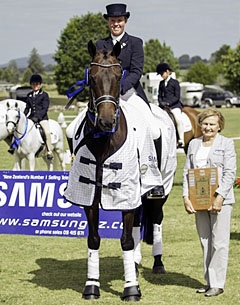 Taranaki’s Catherine West won the 2014 New Zealand Young Rider Championship held at the Kihikihi Equestrian Park on 14 - 16 January 2014.  No less than 95 riders and 123 horses and ponies gathered to contest all levels from novice to advanced at the equestrian park, where the event was being hosted in Waikato for the first time.

Host region, Dressage Waikato members in conjunction with Dressage NZ put a huge amount of work to ensure that the event will be one that riders enjoy.

Catherine West and her NZ bred Hanoverian gelding Anarocz (by (Anamour x Lavinsky xx) won the Prix St Georges with 66.343% as well as the kur to music with 66.623% to take the national title. West is one of the most hard working young riders in the sport training her horses whilst studying at Massey University,  where she is part of the Team Massey equestrian programme. West missed a few of the  pre Christmas lead up shows through exams, and then was struck down with ill health, but bounced back for this event and was unbeaten.