2014 Helen Langehanenberg Clinic in Berne: "Dare It, It's Only Training!" 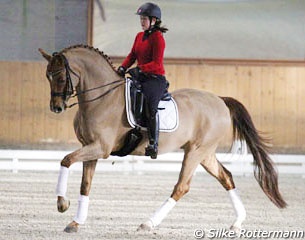 "Dare it, it's only training" were the rather uncommon words of encouragement that were heard over and over again during the two days of training for Swiss Young Rider and U 25-team members at a Swiss Equestrian Federation clinic in Berne, Switzerland on 11 - 12 January 2014. World cup winner and leading German dressage rider Helen Langehanenberg took the young Swiss hopefuls under her wings in the indoor arena of the National Horse Centre.

The dressage public knows the petite German's abilities as a fine and feeling dressage rider, but not many might have already experienced her as a trainer. So not only the young ladies from Switzerland and their parents, but also numerous interested dressage friends were attracted by the renowned guest trainer and crowded the stands at Switzerland's biggest equestrian facility, amongst them several familiar faces of the country's dressage scene.

Heidi Bemelmans, Switzerland's youth team trainer, started the initiative and asked Helen to host a team training to which she happily agreed. Bemelmans began her engagement in Switzerland as the team trainer of the pony riders, but in the meantime she is responsible for all youth divisions. Former wife of Jan Bemelmans, Heidi visibly fulfills her job with real enthusiasm and is ambitious in a positive way.

”Last year the discipline of dressage was in the lucky position to sign a longer acting subsidy contract with UBS for talents in the divisions children, pony, juniors, Young Riders and U 25. This means that in future we are able to support the youngsters with even more goal-orientated and more systematic projects. Already in the autumn of 2013 we could offer trainings with Oliver Oelrich and Hans Günther Scholten and I am very happy that Helen agreed to do the next training despite her busy schedule. I hope the young talents got precious inputs which they can put into practice in the upcoming season,” Bemelmans told Eurodressage. 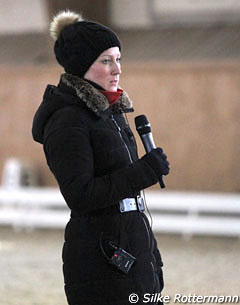 Despite its rich tradition, Switzerland still struggles to regain team strength in the senior division and is waiting for outstanding success in all age divisions. The youth divisions are now steadily growing and for such a small country, this is a feat in itself on which one can build.

On Saturday morning 11 January 2014 Helen Langehanenberg got to know her four- and two-legged students for the weekend for the first time. Before each 45-minute training session the riders gave Helen a briefing on their horses and on which aspects the lesson should focus. Initially six Young Riders and three U 25-riders were invited to take part, but U25-rider Carla Aeberhard and her mare Donna Diandra (by Donjour) withdrew, while her sister Simone was able to take part on Private Dancer (by Jazz).

Of course every partnership had their particular needs, but whatever they worked on, Helen's golden thread was always suppleness and lightness, the hallmarks of her own riding.
With all horses she took care that the they did not lean on the rider's hands and worked over the back to become more supple. To reach these aims the 32-year-old encouraged her Swiss students to sometimes leave their usual paths. For example by stimulating them to ride movements, such as shoulder-in, not under the premise of 200% technical correctness, but to improve contact and throughness. "In the training one is allowed to ride the horse more in a stretching position so the back is coming up, although  at the show the horse has to be up in the bridle again," Helen commented.

In their understandably human attempt to create the perfect impression on that special occasion, some riders were first a bit timid to allow technical perfection fall behind suppleness, but Helen did not get tired cheering them on. "Risk something, dare doing it, it's only training. If it's not working at your first attempt, don't worry about it," she exclaimed on numerous occasions. 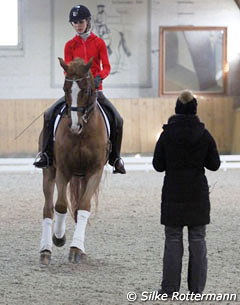 Even though the schedule permitted 45 minutes for each rider, nothing was ever rushed. One horse was quite unsettled at the beginning and tried to jog. So the first goal was to calm the gelding down in an effective way. "The worst thing a rider can do when the horse is excited is to say 'hooo' and 'brr.' Instead try to keep your horse constantly occupied while riding walk a longer time. Bend the inner mandible until the horse allows you to really ride it, until it is in front of you," Helen recommended.

For Langehanenberg it was of paramount importance that the horses always showed the ability to stretch onto the bit in all movements and in all gaits. She stressed that depending on the top-line of each horse this issue gets even more important, which was the case with a horse that had a rather superimposed top-line by nature. When this horse showed the tendency to come behind the vertical and thereby block the activity of the back and the natural swing, Langehanenberg consequently worked on this problem until it showed improvement.

A horse's inner mandible has to be loosened to take the outside rein, but most important the rider isn't allowed to hold in front or even pull backwards. "It's not necessary to hold the horse back and push behind in the attempt to gain more expression. The result is a horse behind the vertical and with an unnatural trot," Langehanenberg stressed. "Often such restrained horses get more and more tense. Instead it's important to allow the horse to show its natural trot and that it's taking the contact by himself. With a quality trot it's dispensable to ride it out.“

In this correspondence it was impressive to see how one horse's outline in particular improved visibly in the course of the lesson. First tense and clearly behind the vertical, the gelding became increasingly supple and loose as soon as his rider dared giving him more freedom in front, allowing him to swing through his body. In the end the horse's neck came up, trot and canter became more relaxed and natural because the impulsion was allowed to go through and was not restrained by the rider's hands. Langehanenberg gave the riders a simple, but effective advice to take home: "Never decelerate more than you accelerate!" She made aware that true collection does not mean slowing down, but increasing the horse's activity.

This principle was practiced up to the highest movements of collection, like the canter-pirouettes, piaffe and passage. Although there were only two riders from the U 25-team present, a few others from the Young Rrider team had horses which have already started working on these Grand Prix movements.

To get more active and diligent canter pirouettes, riders should not entirely pay attention to the size of the circle the hind legs describe. Langehanenberg recommended riding a travers-like canter first and getting into a working pirouette from it.

To obtain more activity and swing in the passage, a movement for which Helen's top horse Damon Hill regularly gets 10s , she asked the riders to move from an active elevated trot into passage so the impulsion is taken along. She explained that is useful to "leave the horses alone for a while so it finds itself in this movement. The passage has to become a gait of its own to them." To keep the activity and suspension in the passage "you have to think 'extension' and absorb the power in front," she added.

What is often neglected in clinics up to the highest levels is the walk. Not so in Berne. With each rider Helen Langehanenberg spent a fair amount of time on this gait which was quite revealing; not only as a breath-catcher in between, but as a movement in itself.  "In the extended walk don't take the reins wider than usual. Take care that you still have an even contact," she stated. 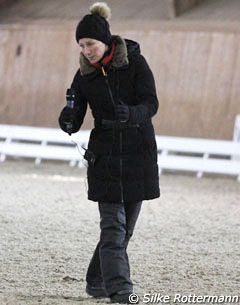 Langehanenberg is a meticulous and consequent trainer who teaches patiently, but insistently until the rider puts her advice into practice. Her instructions are clear and detailed and always based on the training scale. When the basics aren't right, she will not skip them to work on advanced movements, but sticks to the basics until there is sufficient improvement to go on. "If the basics aren't right, movements don't come naturally. But as soon as something comes naturally, the horse will have fun," said Langehanenberg.

Even after the first of two days improvement in absolutely every horse and rider was obvious which speaks for Helen Langehanenberg and the training method she, as a student of Ingrid Klimke and Klaus Balkenhol, represents.

Equally enthusiastic were her students of the weekend. Philine von Bremen from Locarno rode her U 25-horse Dablino Lescadeur, a black German Sporthorse by Dionysus x Frühlingsbote. Von Bremen commented: "It was a fantastic weekend in Berne and I am totally impressed with the good training with Helen. I already expected it, but it surpassed my expectations.
We worked a lot on the suppleness of my horse and it was so interessing to see and feel how he became more supple, easy and over the back and he really enjoyed the training, that was the most important thing we worked on and of course with a more supple horse all the exercises like piaffe passage became really good. It was exciting to see how within a short time a horse can change so much. I am really grateful for the training and I think we all profited a lot."

Celine Balmer was equally ecstatic about the opportunity to ride with Helen. "It is amazing to train with the number two of the world," Balmer stated. "She is a very gentle and patient woman. She saw the sticky points very fast. Before we worked on the movements, we trained the responsiveness in walk, trot and canter. Then we focused on the canter work. I got new tips and ideas how to prepare a movements, e.g. the half-pass or the pirouette. Helen often talked about the importance to have fun and to deal with the horse in a playful way to keep it motivated." 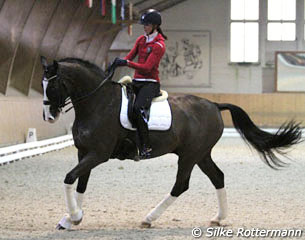 After a long day in the trainer's position, Langehanenberg was happy with how things had worked out during the day. "I am thrilled by the high standard I saw today," said Langehanenberg. "There are well ridden and happy horses who show good movements. I focused on improving the swing of the back and the straightness."

Even though she praised the overall quality and the potential itself, the Billerbeck based rider added that "the basis here is good, but to be successful on the international level riders need to show it in a test. Only this can be judged be the judges. Riders need to ride very precisely from point to point."

When asked if Helen were to return to Switzerland, she replied, "why not? I would love to return if I am asked. With such a team it's fun to work with, because one can see improvement within just one lesson."

This might be the quintessence of this training weekend in Berne: The importance of good and goal-orientated training that is based on the training scale. It is indispensable on the road to quality riding and success.