Rock For Me, Champion of the 2013 Westfalian Stallion Licensing 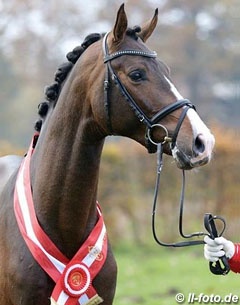 The 1.69 m standing Rock For Me (by Rock Forever x Florencio x Longchamp) has been named champion of the 2013 Westfalian Stallion Licensing in Munster-Handorf on Wednesday 26 November 2013. The bay colt stood out with his swinging movements and three very good basic gaits, but did not become the price highlight of the auction.

The Westfalian stallion licensing committee was quite generous in awarding no less than 2/3 of the licensing lot a positive verdict. Seventy-two stallions were presented for approval, 46 of them were approved and 15 were honoured with a premium title. Twenty-six licensed stallions were dressage bred of the 43 presented.  The Dutch influence at the Westfalian licensing was big with offspring by Ampére, Bordeaux, Boston, Bretton Woods, Jazz, Totilas and Vitalis.

The licensing champion by Rock Forever x Florencio, who is bred by Heinz Kuse, owned by Cathrin Beckmann-Meßfeld and originally named Rockencio (now Rock For Me), presented himself well and was a complete horse with a good walk and trot. He sold at auction for 300,000 euro to Dressage Performance Centre Lodborgen. 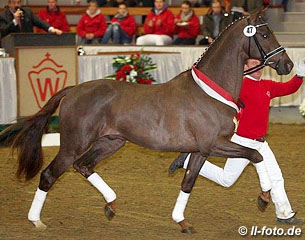 The price highlight of the auction was the reserve licensing champion, who was more the talk of the town. The liver chestnut Valparaisa (by Vitalis x Furst Piccolo x Rheingold) is bred by Josef Deimel and owned by Heinz-Ludwig Ohlemeyer. The beautifully modelled Westfalian branded dressage colt excelled with his supple basic gaits. He sold over the phone  after a bidding duel with Swiss Samuel Schatzmann to an American customer for the top knock down price of 360,000 euro.

All four Vitalis' (by Vivaldi x D-Day) offspring presented in Munster-Handorf were licensed, making him the best producing sire of the licensing! Rock Forever was represented by three colts who were all approved. His get showed off by having a decent jump as well during the free jumping phase. The third ranked premium stallion was the KWPN registered Goldberg (by Amazing Star x San Remo), bred by V. Poele and owned by Gestut Neuenhof. This black show stopper moved with much expression, a quick hind leg, uphill tendency and was relaxed and ground covering in walk. He was not offered for sale.

The crowds in Westfalen were divided on the Furst Fugger x Rubin Royal, who was very good in trot on the lunge line, but was unable to show a proper walk. The colt was approved nonetheless. The Totilas x Lord Sinclair colt was withdrawn from the licensing when he proved to be unlevel on the lunge line. 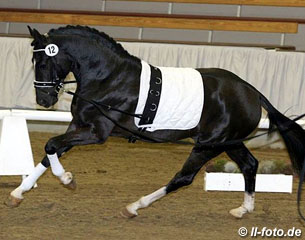 A total of five stallions sold for more than 200,000 euro making this auction one of the most successful ones for the Westfalian verband in recent years.  The show jumper by Baloubet du Rouet x Weinberg sold for 300,000 euro. The duo Lone Boegh Henriksen/Paul Schockemohle, which owns the popular stallion Furstenball, acquired the premium colt Dragon Hill (by Damon Hill x Sandro Hit) for 240,000 euro.  A jumper by Darco x Quival sold for 205,000 euro.