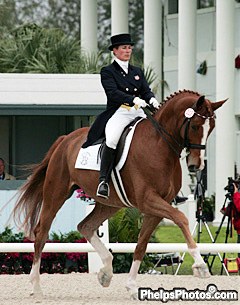 The 2014 Palm Beach Dressage Derby CDI-W, one of Florida's most unique dressage competitions since 1983, has been salvaged by moving the show to the Global Dressage Festival venue in Wellington, Florida. The show is set to take place on 27 January - 2 February 2014 pending U.S. Equestrian Federation approval.

The Chronicle of the Horse reported today that Robert Dover put GDF show organizer Mark Bellissimo in touch with Derby host Mary Anne McPhail after the contract for the 2014 Derby was terminated with International Horse Sport Palm Beach.

The Derby was first held in 1983 at the Hanover Horse Farm in Loxahatchee, but the show moved to the McPhail’s Horse Park at Equestrian Estates in Loxahatchee, FL, in 1999.

"I’m very pleased that we’re able to put on the Derby again," McPhail told The Chronicle. "We were all disappointed it didn’t look like it was going to happen this year. I feel that the show grounds in Wellington are so beautiful, and the facilities are great. It will be a definite positive. We’re looking forward to a bigger and better future for the Derby."

Read the full story on The Chronicle of the Horse