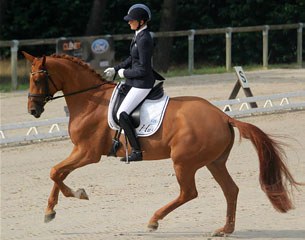 Divine Star JM is a Hanoverian mare by Desperados x Rohdiamant, which Jessica owned herself.  At the French young horse championships the pair won both rounds under saddle, but in the first round the mare received an unusually low conformation score which made the combination drop to 11th place with 77 points. Her winning score of 86.40 points in round 2 could not give her the title, but moved them into the reserve champions' spot.

The talented Divine Star has now been sold to Ruddat as a new rising star for his sponsored rider Kathrin Meyer zu Strohen, whose husband Hans Heinrich trains Jessica.

"Of course I'm very sad and touched by the departure of my mare," Michel explained. "She was my first own horse. Unfortunately I was not able to refuse the great offer that was made. I wished I could have kept her in France because of her tremendous talent and extraordinary qualities."

Michel is head rider at the big French breeding station Haras de Hus and has plenty of horses to ride. Meyer zu Strohen is aiming to compete Divine Star JM at the 2014 World Young Horse Championships.