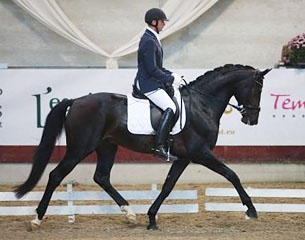 The Belgian Young Dressage Horse Championships finally returned to its highly celebrated original location in Gesves for the 2013 edition and were considered a huge success. Held from 25 - 27 October 2013, the Nationals were organized this year by Gregoire Naslin and featured  the 4-year old El Capone, 5-year old Dolcherie and 6-year old Sir Donovan as grand winners.

In the 4-year old division Tom Heylen and Luc Mariën-Bouwens' Dutch warmblood El Capone (by Tuschinski x Camus) rode to the national title after winning the first round with 83.600 points and slotting in second in the second round with 79.80 points.  Dominique Mohimont and the Dutch bred El Corona Texel (by Wynton x Goodtimes) were good for silver. They were third in round on (79.80 pts) and climbed to first place in the final round with 82.40. Katrin Verreet claimed bronze with her own Quorum Y (by Quaterline x Uniform) after placing fifth in round one 78.00 and third in the finals with 79.20 points.

In the 5-year old division Belgian World Young Horse Championship contestants Tom Franckx and the Dutch mare Dolcherie (by Painted Black x Krack C) showed excellent form winning all three classes with 84,000, 80,400 and 84.200 points. Laurens Vanderbeeken and All Inclusive (by Abanos x Sir Lui), which is bred by Belgian Grand Prix team rider Philippe Jorissen, were a strong second with a second place in round one (80,000) a fifth in the second round (72.00) and second again in the finals with 78,000. Nick van Laer on Serge Pais' Dutch bred Double Dutch (by Jazz x Wisconsin) were solid thirds after ranking fourth in the first round (77.600), second in round two (76.00) and third in the final test with 75.80.