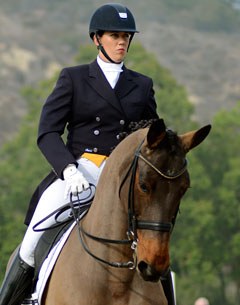 German expatriate Lientje Schueler has made a fabulous debut at Grand Prix level in her new home country, the United States, aboard her brand new ride Mike Tyson L. This budding partnership is proving to be better than Lientje could have dreamt. The professional dressage rider won her first Grand Prix with 71.596% at the national show in Del Mar, CA, on 26 - 27 October 2013.

With only five months of in the saddle "face-time" under her belt Oldenburg native Lientje Schueler has gelled well with the temperamental 14-year old Mike Tyson. She discovered him through her close friend and business partner Viola Abrahams at Johnny Hilberath's yard. The horse was Finnish owned at the time and for sale to the right rider.

Sired by hot-head Michellino out of a Flamingo dam, the bay gelding would only be a match for those who can channel hotness into greatness. Abrahams knew from the start that Schueler and Mike Tyson L would be a match made in heaven. "I try to get forward with bringing the right horse to the right person. Maybe it is a special talent," said Oldenburg based Abrahams about successfully matching Schueler to Mike Tyson. "It's a stomach feeling as well as working hard work with knowledge and studying to become better in training and riding so that you can fulfill the goals and wishes for the clients."

While many high performance dressage riders are fortunate enough to have brilliant sponsors financially covering every single step on the road to success, finding a maecenas to support a rider is not an easy feat. Hard work and total dedication to the sport as well as loyalty and commitment to her clients paid off for Lientje.

"Viola first told me about Mike Tyson in May 2013, but at the time I couldn't get over to Germany to try the horse, nor did I have any funding available," she confessed. "I had a ticket to go over to Germany for two days in early June and used the month in between to work on funding." Schueler's turn for the better all started when her long time client and friend Nan Corwin agreed to pay all monthly expenses for her future Grand Prix horse. "She inspired me to for sure try Mike at Jonny Hilberath's and to continue working on the funding." 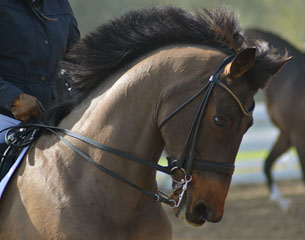 The first try-out session in Germany was an adventure in itself. "My flight out of Los Angeles was delayed and Jonny Hilberath was at an important dinner. I ended up trying Mike Tyson  for the first time at 9 o clock that night. He was described to me as "very hot" and even though I absolutely prefer a hot horse I thought 'Oy, this might be a bit much, even for me'," Schueler admitted. "But then as soon as I got on, I was 100% comfortable on him."

Schueler confirmed it was love at first sight and there was an instant connection with the horse.  "I absolutely loved him and when trying him again the next day, I realized I would have to change my ticket and stay another day to ride him again," she said. "We got along so well, that it was getting more serious than I ever would have thought."

A Matter of the Heart

On the last day of trying him, Schueler emotionally broke down when she got off the horse. "No one but Viola and my mom could see me," she said. "My mom asked why I was crying and and I barely managed to say 'because I just had the best ride on Mike Tyson and I have no idea, if I'll be able to get this horse'," Lientje reminised. 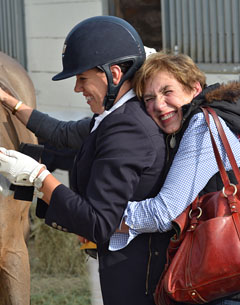 Schueler's long-time supporter Pinky Roberts came to the rescue. As the owner of the 6-year old Regalo (by Rosario) with whom Lientje became the 2012 U.S. Young Horse Champion, Roberts was willing to commit and jump into a new adventure with the dressage rider. "Pinky had emailed me and it read 'Be still my heart and put all rational thoughts aside.' That email completely threw me off, because Pinky is a very rational thinker and we have a similar approach that way - normally." Not having the proper funding in place to acquire this ready Grand Prix horse, Schueler was afraid to let her heart be the judge over her mind. "Right before I left to the airport, Viola told me 'Lientje, if you can't understand what that means, I can' and so Mike Tyson became a group effort."

Acquiring Mike Tyson L became a family affair as Lientje's parents paid for the vet check, Corwin the daily expenses to keep the horse, Roberts put down the purchase price, Dave and Michelle Markquart from Wisconsin payed for the horse's flight, quarantine, and training at Jonnys until he left for the US and Lientje's loyal client Linda Moeller gave ger money for equipment. "Many people here at home have just been so supportive of Mike Tyson and I in different ways," she added.

Schueler originally came to the U.S.A. in 2000 to work for Jan and Amy Ebeling. She spent 2,5 years at Ebeling's The Acres as well as going back and forth to Germany. In the summer of 2005 she became a working student at Steffen Peters's yard in Arroyo, CA, where she has now established her own independent business. "I am every bit as happy here as I was 8 years ago," she said. 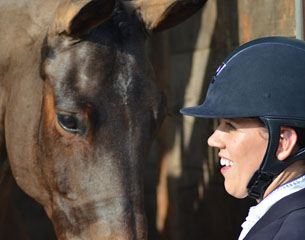 "If you are willing to work hard, Shannon and Steffen are the greatest supporters anyone could ever ask for. I got to groom for Steffen at many shows including the 2006 WEG in Aachen, got to ride and compete on many different horses, and by now run my own training business out of Shannon and Steffen's facility, but it doesn't really feel like that," she explained. "Shannon and Steffen are big on the idea of team work, and that's how I like to think of it as well. We are one big team of many and everyone of us contributes to it all being a great training barn, where the horses truly come first."

As soon as Mike Tyson L arrived in the U.S.A, Lientje was able to really get to new her new equine partner. She describes Mike Tyson as a "very intelligent horse who is very aware of his environment, especially noise and he definitely has a few corks. It can be challenging at times, but his work attitude is unbelievable and he seems to have endless amount of energy.  After he's done striking and shaking his head a few times in the beginning of every ride, you can start to channel his hotness in a positive way. It's important to allow him his moments of forward, always, even if at times it feels like you couldn't possibly get him back, that's actually when he comes back to your aids the most." Schueler and Mike Tyson L made their Grand Prix show debut at the Spooktacular Halloween Show held at the Del Mar Horse Park last weekend. The pair won the Saturday GP class with 71.596%. Leading up to the show, Lientje did not think she would be ready, but both Shannon and Steffen pushed her to get her first Grand Prix done and out of the way.

"I love to compete and I'm very driven when it comes to competition, so especially the week before I have a tendency to not be happy with any of my rides and wanting to over-perfect things," she confessed. "Once it's competition time, for some reason my nerves go away- it becomes a job, I get very focused, and always try to do what Steffen tells me to do, while keeping my own thoughts."

Schueler's entire support team was present to witness the debut. "This time I wasn't sure the nerves would go away, with it being my first Grand Prix, my mom and Viola had flown in from Germany, people from different parts of the states flew into town for me, and everyone here was going to be there as well." Fortunately as soon as she got to the show grounds and she had Steffen coaching her the nerves completely went away. 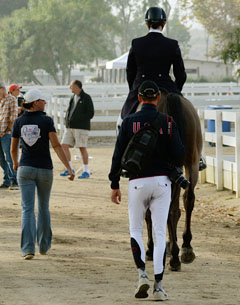 "I have seldom seen such a first ever Grand Prix," Abrahams stated. "They produced not even a totally fault free test with lovely transitions and super ground covering canter work, but they already showed a true harmonious partnership with great room and potential for the future. This is definetly like a movie: a little girl from the Oldenburg country side made it to the US years ago and with her talent, very hard work, and with wonderful people around she has now become a Grand Prix rider. The green card is already there and now US-citizenship is the next goal. Sometimes these story do come true."

Schueler's show season is finished for 2013 and she will get together with Steffen to draw a plan for 2014. Coach Peters is looking forward to next year and described the new pair as "a very exciting new combination. It's lots of fun to work with both of them," Steffen commented. Lientje keeps both feet on the ground though. "Even thought this was a great start, consistency is important and not that easy to establish. There are a lot of things I need to work on in my riding and for now the focus will be on the training at home," she concluded.