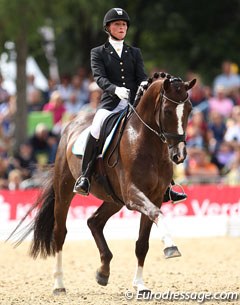 Bilan is bred by Per Arne Persson and was owned by Telde and Lolou Wetter. The very elegant and athletic gelding is by Bocelli out of Dilber (by Donnerschlag x Gauguin de Lully). He arrived at Minna's yard in June 2012 and quickly became one of Minna's favourite horses. In 2012 they were fourth in the 4-year old division at the Swedish Young Horse Championships.

Bilan has now been sold to Anna Jaworski, who trains with German based Belgian Grand Prix rider Carl Cuypers. In 2011 Jaworski was an L-level rider but has made a stellar rise through the levels and is currently successful at Intermediaire I level.

"She has a lot of feeling and is really well in executing the information I give her," said proud trainer Cuypers. "She's much fun to work with. When we tried Bilan it clicked immediately. We call him pineapple at the barn. He's everybody's friend in the stable."