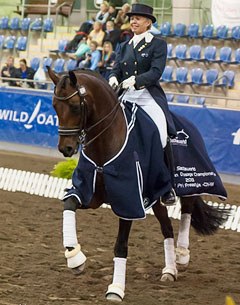 Saturday is freestyle day at the Australian Championships. In the Young Rider Freestyle CDI-Y there were four horses from Victoria, four from Queensland and one from New South Wales. The results of today's competition was totally different to the outcome of yesterday's Young Rider class. Victoria Stuckey from Victoria on Mayfield Miracle came first, second went to the sole rider from NSW, Elisabeth Hulin on Moscow and third went to Queensland rider Rosanna Relton on Four Winds Bombadier - one from each state of the east coast of Australia - everyone happy!

By this stage, good numbers of spectators had started to filter into the equestrian centre looking forward to the two final competitions - the Intermediaire I Freestyle and the Grand Prix Freestyle CDI-W. Unfortunately it didn't start off well for Brett Parbery on Good as Gold. Even though the horse had one of Australia's best riders onboard, it was obviously unnerved by the atmosphere to the degree that Brett made the decision to retire him from the competition. Twelve horses later, Brett entered the arena again, this time on the Farrell Family's stallion Aber Hallo. This ride was at the other end of the spectrum compared to Brett's first ride. Aber Hallo seems to be a very sensitive horse who needs a very sensitive pilot to contain the energy. Brett did this beautifully. Together they scored 71.700 which put them in the lead. Straight after Brett was Tor van den Berge on Cheryl Obrien's black stallion Lauries As - it was a great example of how when you combine an extremely competent rider on an extremely talented horse (and it all goes to plan), the result is impressive. Impressive enough to win the competition, scoring 71.925. The last horse into the arena was Robbie Soster on Robali Razzamattazz. They too showed how it should be done, scoring 70.275 which was enough to secure third place.

The Grand Prix Freestyle CDI-W was always going to be interesting as last years winner, Maree Tomkinson on Diamantina, would be up against Sheridyn Ashwood and Prestige VDL who won all three GP classes at the 2013 Sydney CDI (which Maree and Diamantina didn't compete at). Not only that, the field also included the likes of Mary Hanna, Rozzie Ryan, Heath Ryan and numerous other riders that have been steadily improving over the past year. As we all know it only takes a couple of small mistakes or a bad day and the results can change dramatically. This and that is pretty much what happened. By the end of the night, Mary Hanna and Sancette who placed sixth in the Grand Prix CDI-W on Friday managed to secure 1st place with a very exciting ride - full of energy, expression and engagement - together they scored 70.850. Second went to Sheridyn Ashwood on Prestige VDL, scoring 70.225 and third went to the very correct and entertaining Heath Ryan and his black stallion, Regardez Moi, with a score of 69.550.

Hanna and Sancette were sixth in Friday’s Grand Prix and they bounced back from a sluggish start to this event to produce a superior performance in the kur. The five time Australian Dressage Champion is pleased with her mount’s performance considering he’s only just come back into work.

“He’s not so fit as he hasn’t been back in work so long, we almost didn’t make the trip but he  was telling me that he wanted to so here we are. He wasn’t at his best yesterday but I was absolutely thrilled with him tonight and I’m really looking forward to him improving even further,” she Hanna.

It was a long day of dressage at the Sydney International Equestrian Centre - personal bests were made, new horses made it to the podium, objectives were achieved and lots of boots were polished.