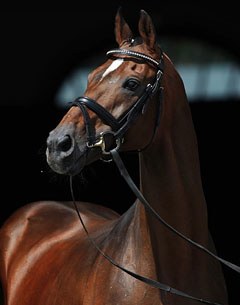 The Hanoverian licensed stallion Lauries Crusador xx has been euthanized in the morning of 22 October 2013. The bay Thoroughbred foundation stallion was 28 years old.

Last week Lauries Crusador suffered from colic symptoms and was transported to the equine clinic. His blood values indicated a heavy infection of the spleen.  In order to save the stalion from more pain and a heavy operation, the Celle state stud decided to take the stallion back home and give him a few last days at home in peace before being euthanized. This morning the stallion again suffered from colic and was put down in the presence of his year long handler Fred Müller.

Lauries Crusador xx (by Welsh Pageant xx x High Top xx x Le Levanstell xx) was born in Great Britain in 1985 and started his career on the race track. He achieved a GAG of 90.5 kilogram and was therefore allowed to be considered for German warmblood breeding. The late stallion owner Maas J. Hell discovered the bay and through his contacts Lauries Crusador x ended up as a state stud stallion. He served the stud for 23 years. Since 1991 the stallion relocated to the station in Landesbruck between March and July for semen collection.

Lauries Crusador xx has been one of the most influential thoroughbred stallions for German warmblood breeding. He sired 2,713 foals of which 264 mares became state premium and 55 sons were licensed.  His most renowned licensed offspring include Londonderry, Lancier, Laurentio, Longchamp, and Heslegards Louis.

In 2006, the Hanoverian society proclaimed a non-Hanoverian stallion for the first time Stallion of the Year.