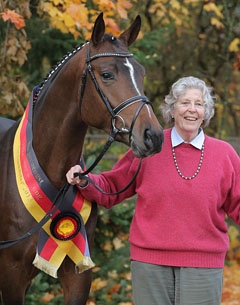 The bay stallion Kissinger (by Singolo x Arogno) was named champion of the 2013 Trakehner Stallion Licensing on Saturday 19 October 2013. He also became the price highlight of the auction, selling for 250,000 euro to The Netherlands.

Kissinger originates from the breeding stock of Alexandra Countess of Dohna (Bispingen). The youthful 79-year old is a descendent of the Dohna-Schlobitten dynasty which is inextricably linked to the Trakehner breed. When her stallion was named champion, the dame  took the reins and went on a lap of honour with the two-and-a-half-year-old stallion - in walk - proudly and carefully observed by Kissinger, who fell into step with his breeder exactly as if he wanted to look out for her.

Kissinger comes from one of the oldest stud books of the Trakehner breed, meticulously maintained in Schlobitten by the Dohna Family. He is a member of the mare family of Kordel.. “Steadfast temperament, valuable lineage, always consistent in his movement, and exceptionally motivated," said Trakehner breeding director Lars Gehrmann of the much-celebrated champion stallion. The Countess of Dohna put it rather differently: “He is such an intelligent horse, he is cleverer than me.”

The young stallion was acquired by Hans Kinzler (Heiligenloh) as a foal, whose family is acquainted with Countess Dohna. “This stallion is for the Countess, even if it was me that bought him.  This is her horse and her moment”, he said as he smiled modestly.  Kissinger was prepared for the licensingat Heinrich Ramsbrock's yard in Menslage. Philip Klingbeil was the handler at the licensing. At the auction after the licensing, the champion sold for 250,000 euro to Joop van Uytert in The Netherlands.

Scaglietti (by All Inclusive out of Schneeflocke VI by Michelangelo) was named reserve champion of the licensing. “Large and strong, with fine contours and good pedigree,“ said Gehrmann, “a stallion with harmonious body balance, he is always consistent and is clearly the best Trakehner stallion from  Schleswig-Holstein.” Scaglietti was born at Gestüt Tasdorf and bred by Trakehner society president Petra Wilm. As a foal, the young colt developed an allergic reaction to his dam's milk, but the problem was solved and the foal developed superbly. He is now creating a stir and sold for 170,000 euro to a buyer from Berlin, who has decided to leave the brown beauty at Tasdorf for the time being.

Also receiving special recognition were Empire State und Luxor. Empire State (by Imperio out of Eviva by Kaiser Wilhelm) was bred in the Netherlands by Jikkie Willemsen-den Biemann. Hubertus Poll from Hörem purchased the aspiring stallion and presented him in Neumünster for licensing. Empire State impressed with his sequence of movements and has a first-class lineage behind him. The  large yet still slightly gangly-looking young stallion will remain in Hörum with his rearer.

Luxor, who is a son of Redecker, out of Leandra by Lehndorff's, impressed in the free jumping with his physique and energy. “He is a stallion who embodies immense quality and fantastic sporting characteristics,” said Gehrmann.  He is owned and bred by Wilhelm and Renate Dettmering from Neuenkirchen on the island of Rügen, and was co-owned by Gestüt Hohenschmark – at least until Sunday afternoon. Luxor was sold for 35,000 euros to Wiesbaden, the regional capital of Hesse.

Rusticus (by Favoritas xx out of Rispe IV by Bartholdy), born in Schleswig-Holstein, was also licensed and was awarded the title of best half-breed stallion. The stallion was bred by Horst-Dieter Jäger from Hennstedt, and owned by Hauke Jäger, Lütjenwestedt. Rusticus will move to the USA.

In total, the Trakehner Verband licensed 12 of the 42 Trakehner colts presented in 2013.  “We certainly kept an eye out for sportiness, as we know that amongst breeders there is a great deal of discussion as to how much sportiness costs us in terms of type,”  commented Gehrmann.  “Nevertheless, in the interests our breeders we must be aware of which horses are bought with the appropriate movement potential.”

Following Kissinger and Scaglietti, the third most expensive horse was the newly-licensed Gallardo (by Imperio out of Gute Zeit by Consul), bred by Hubertus Poll (Hörem). The stallion was sold to a buyer from Lower Saxony for 70,000 euro.

A total of 674,000 euro was achieved by ten licensed stallions who were up for auction. The average price was 67,400 euro. For 20 unlicensed stallions up for auction, the average price of 8,794 euro, one thing that the Trakehner Verband was not entirely satisfied with. “We must analyse exactly where mistakes may have been made,” said Chairperson Petra Wilm with regard to the weekend's auctions and her colleague on the board, breeding director Lars Gehrmann, is in total agreement with her: “We will do our homework, that is our responsibility."