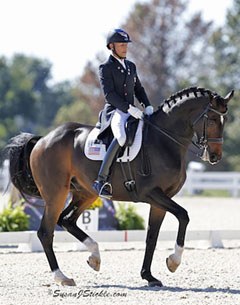 Three division of the National Championship competition at the 2013 U.S. Dressage Festival of Champions got underway Wednesday in the Kentucky Horse Park's Rolex Stadium. In the Grand Prix Championship, Steffen Peters and Legolas have seized a sizable lead following an impressive test, while Kim Herslow and Rosmarin head the field in the Intermediaire I Championship. In the U.S. Under 25 "Brentina Cup" Championship Emily Wagner and Weltdorff hold a narrow lead in their quest for a National Title.

Peters (San Diego, Calif.) took his first step towards an unprecedented seventh National Title in the Grand Prix by scoring a 77% with Four Winds Farm's 11-year-old Westphalian gelding. The reigning National Champions delivered a nearly flawless test that was once again highlighted by Legolas 92's impressive piaffe and passage. In the past, the gelding has found difficulty with the flying changes but looked to be more confirmed in the movement on Wednesday afternoon. 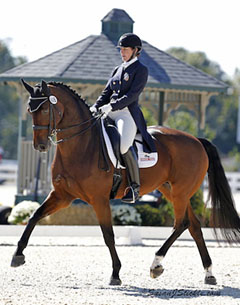 "Legolas was great; I did a very short warm-up. The changes are always something I worry about but they felt good in the warm-up and just as good in the ring," said Peters. "I felt it was a very clean test which is what you look for on the first day."

The combination spent time this summer in Europe competing against the very best in the world, including anchoring the third place U.S. effort at the Aachen CDIO5*. They will spend their off day on Thursday preparing for Grand Prix Special where they will look to recreate some of the strong work produced overseas.

"You can't practice the Special with him too much before the Grand Prix because he gets confused," said Peters. "The plan again is a clean test." "I was really happy with Breanna, she was very consistent," said Raine of the U.S. Young Horse Dressage Program graduate. "She's gotten much stronger since I was in Europe. I was very happy with her today."

Finishing in third place was Raine's Hickstead teammate, Guenter Seidel (Cardiff, Calif.) and Coral Reef Ranch's Coral Reef Wylea. The pair scored 71.489% in spite of the 13-year-old Westphalian mare having her tongue over the bit for the first half of the test.

Grand Prix competition continues on Friday night, as riders will perform the  Grand Prix Special under the lights to earn another 40% of their overall total.

Twelve Small Tour combinations entered the Rolex Stadium on Wednesday before the lunch break to contest the Prix St. Georges test, which counted for the first 40% of the championship score. 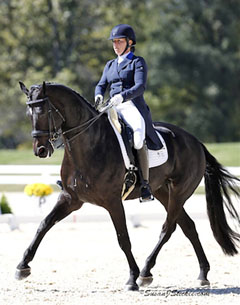 Herslow (Stockton, N.J.) and Kiroli Enterprises Inc's Hanoverian gelding  have enjoyed an extremely successful 2013 campaign and maintained their form on Wednesday to score 75.789%. The talented pair prepared for the 2013 U.S. Dressage Festival of Champions by sweeping all three Small Tour tests at the Dressage at Devon competition two weeks ago.

"I came here after leaving Devon with really nice rides and he really felt in his groove. I came here hoping to up that," said Herslow of Rosmarin. "I'm thrilled it was my goal to ride a clean test and I'm hoping to improve on that tomorrow."

The combination, which was part of the winning U.S. effort at the Wellington Nations Cup CDIO3*, has begun to work on the Grand Prix movements. However, Herslow will let the young horse guide her in making the decision of when to make their debut at the highest level.

"He's still young but we are training the Grand Prix movements," said Herslow. "I'm not going to move him up until he tells me he's ready. I want to keep the positive harmony." 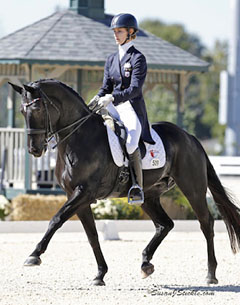 Finishing in second place on Wednesday was last year's Intermediaire I National Champion, Caroline Roffman and her own Her Highness O

Roffman (Wellington, Fla.) and the 10-year-old Hanoverian mare traveled to Europe over the summer to compete in Small Tour competition at some of the world's most prestigious venues including CDIO Aachen. The pair demonstrated how much they had learned in their abroad as the scored 72.842% in the FEI Prix St. Georges Test.

The 2013 Championships are likely the last time the 2012 USEF National Developing Horse Prix St. Georges Dressage Championship winner will compete on the Small tour. And therefore Roffman is enjoying every moment of competition this weekend with the talented mare.

"I'm thrilled with the horse, I'm enjoying the ride; I want to have a good last I-1," said Roffman. "She's a good competition horse and I'm going to continue to develop her."

Finishing in third place was Shelly Francis (Loxahatchee, Fla.) and Patricia Stempel's nine-year-old Hanoverian gelding Danilo. The pair scored 69.447% despite an error of course before the pirouette in the canter work.

Six competitors lined up in the Under 25 "Brentina Cup" competition on Wednesday morning to perform the USEF "Brentina Cup" Test. The "Brentina Cup" was developed to assist and encourage U.S. Young Riders in making the transition to Senior Grand Prix competitor. All the competitors gain valuable experience this weekend, getting the chance to ride at the U.S. Dressage Festival of Champions and performing the movements required at the senior level. Wagner, riding her own Weltdorff, claimed the top spot in the first test and the early lead in the championship. The 25-year-old from La Cygne, Kan., finished with a score 65.667% to hold a .026% lead.

"Weltdorff was good today, I was very happy with him," said Wagner. "He got more relaxed as he went, so that was super. I think there was a lot of harmony there and I was really happy with that. It wasn't as brilliant as maybe I could have pushed for, but at the same time, it just wasn't the right feeling as we came around the ring; he was just a little too tense. But I was really happy for him, and everything went well."

Wagner and the 11-year-old Hanoverian gelding have been together for eight years and the pair is learning the ropes of the Grand Prix ranks together through the Brentina Cup program. They received helpful advice from Robert Dover, Chef d' Equipe/ Technical Advisor for the U.S. Dressage Team, while warming up yesterday.

"He told me the passage we have is very good, but it needs to be much, much quicker going into the piaffe so that we have the energy to make the hyper-active passage. It really worked in my second ride yesterday but I didn't trust it in the ring enough. I've known his passage has to be quicker and it went well yesterday so I think I'm going to see if that works again. It's always a learning process."

"I was really happy with him," Vaughn said. "I just wanted to focus on having a relaxed, clean test. I think there's always more in there that I can get out, but the first day I just wanted it to be clean. It was pretty clean and I'm very proud of him." 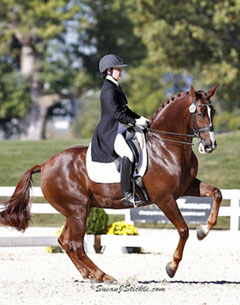 Vaughn was thrilled with her results and grateful for the valuable experience of the USEF "Brentina Cup" program.

"I think it's extremely important. It's a big jump from Young Riders, but it's definitely necessary because I know I'm not ready to compete against a Steffen Peters. You get to feel what it's like; you're still competing against great girls and guys with great horses. It's like a stepping stone."

The Brentina Cup Championship competition continues Friday, with riders performing the  U-25 Grand Prix Test, which will count for the remaining 50% of the overall average.