Rath Returns to the Show Ring with Bretton Woods 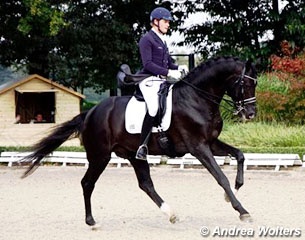 Former German team rider Matthias Alexander Rath made a long-awaited more high profile return to the show ring, not on Totilas, but on the upcoming FEI horse Bretton Woods. The pair made a surprise entry in the Nurnberger Burgpokal Qualifier at Gut Auric on 5 September 2013.

Rath and the 7-year old Dutch warmblood licensed stallion Bretton Woods (by Johnson x De Niro x Romancier) finished sixth with 67.122%.  The class of 21 competitors was won by Holga Finken on Haydn with 69.463%.

Matthias Rath and his number one horse Totilas competed last at the CDI Hagen in April 2012 and haven't been to any competition in more than a year and a half.

In 2013 Rath has been competing three different horses at a few regional shows. He showed the licensed stallion Don Frederic (by Don Frederico x Wolkentanz I) at A-level in Kreuth and Diedenberger and the small tour horses Hope (by His Highness x Rubinstein) and Don Henrico (by Don Frederico x Lauries Crusador xx) at S-level in Redefin, Oberursel and Ankum.