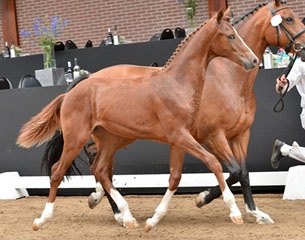 The chestnut colt Ibiza (by Desperado x Jazz) became the top selling foal at the 2013 Midden-Nederland KWPN Foal Auction held in Lunteren, The Netherlands on 4 September 2013. With a knock down price of 72,000 euro, Ibiza became the second best selling foals ever at a KWPN foal auction.

Forty-four foals were offered on sale, but the toughest bidding duel between Siem Kat and Jan Vink was for Ibiza. Bred by Luc Boogert, Ibiza was a last minute wild card addition to the auction and stallion owner Jan Vink acquired it for a top price of 72,000 euro. The record of the best selling foal is still held by Zalza Time (by Painted Black) which sold for 96,000 euro at auction in 2004.

The second most expensive foal in Lunteren was Igenieur Vonkenstein (by Apache x Havidoff). This colt sold for 25,500 euro.

The average price of 7,200 euro for a foal at this auction was boasted incredibly by the price highlight.