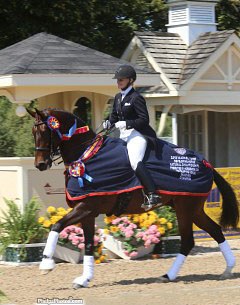 Laura Wharton-Mero and her Dutch warmblood Zandor became the winners of the 2013 U.S. Developing Grand Prix Horse National Championship held at the Lamplight Equestrian Center in Wayne, ILL on 23 - 25 August 2013.

The field of six Developing Grand Prix horses returned to Lamplight’s Championship Arena to earn the remaining 60% of their championship score by performing USEF Developing Horse Grand Prix Test. They carried forward the score from Thursday’s FEI Intermediaire II Test which composed the first 40% of their score.

Laura Wharton-Mero (Woodstock, GA) and her own Zandor (Florencio x Nancy BS/Amulet) were the winners of Thursday’s Qualifying Class and returned the Championship Arena looking to earn the National Championship. The nine-year-old KWPN gelding once again demonstrated his aptitude for the Grand Prix movements to finish third in the Championship Class on a score of 66.542% to finish on an overall total of 66.715%.

“Zandor had a nice ride Thursday, he was a little tight at the beginning but got better,” said Wharton-Mero of the expressive gelding. “Today he stayed very consistent, there were a couple bobbles but he stayed consistent.” 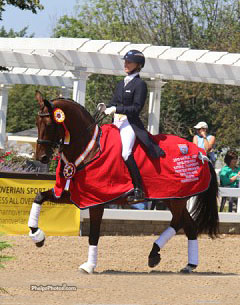 Zandor has been a part of the U.S. Young Horse Dressage Program since he was a four-year-old and competed in last year’s Developing Horse Prix St. Georges Championship. His win this weekend is not only a testament to the program but also the Wharton-Mero’s training.

“I’ve come through this program, this horse has been doing this since his four-year-old year,” said Wharton-Mero. “It’s a wonderful feeling to win.”

Reserve Champion honors went to Kathy Priest (Versailles, KY) and her own 10-year-old Dutch warmblood  Wild Dancer (Florett As x Reality B). The impressive mare improved upon her performance on Thursday to best the field in the Championship Class with a score of 66.708%. They finished on a championship score of 66.253%.

“I’m happy with my girl she stayed pretty consistent,” said Priest. “I’m happy she hit her one-tempis and the passage piaffe tour is improving. I’m thrilled.” 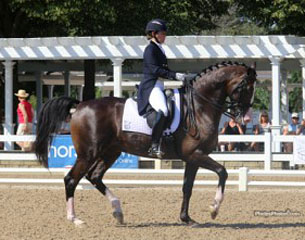 Katie Riley (White House Station, NJ) and her own nine-year-old KWPN stallion Zanzibar (Consul x Juventafee/Farmer) secured third place honors with a championship total of 66.090%. On Saturday they cruised to 66.583% to earn second place in the Championship Class as well as the Highest Place U.S. Bred award.