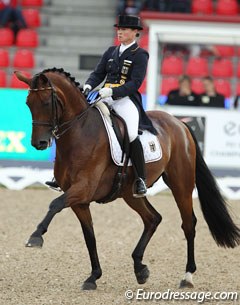 Isabell Werth and the German team are in the lead after the first group of riders competed in the Grand Prix Team Championship competition at the 2013 European Dressage Championships in Herning, Denmark, on Wednesday 21 August 2013. Werth and second placed Fabienne Lutkemeier were consistent whereas their biggest rivals Great Britain and Denmark were unable to build much on their fourth riders.

The dressage competition at the European Championships kicked off Wednesday afternoon with 32 riders competing from 14.30h till 20.10h. While the weather was dry, summer temperatures have gone and it got quite chilly in the stadium towards the end of the evening. Despite a few big names appearing in the ring today, no amazing tests were ridden today and spectators left the stadium underwhelmed but hopeful for much better and more tomorrow when it's the big headliners' turn.

Multiple Olympic gold medalist Isabell Werth could not attribute to a better, more impressed feeling today. While she is in the lead with 75.213% it certainly was not one of her stronger rides and she was lucky to get those points from the panel of seven judges. There were quite a few very blatant discrepancies but considering that the panel had seven members, their individual influence is lessened. The panel -- consisting of Gardner (GBR), Hoevenaars (AUS), Törnblad (DEN), Verbeek-van Rooij (NED), Plewa (GER), Judet (FRA) and Svalling (SWE) -- was economical with their points, not giving away too many presents, except for Werth. The very experienced rider is an ace at test riding but her 12-year old Hanoverian gelding Don Johnson did not look like the happiest camper today, regularly opening his mouth and being unsteady in the top line. The overall silhouette did not look harmonious. 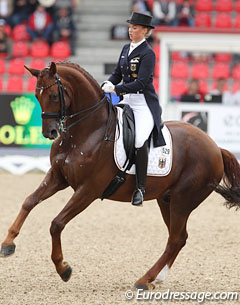 The pair started with same passage steps in the collected trot in the first corner, followed by a correct medium trot and huge half passes which could have been more even in stride length. The halt for rein back wasn't entirely square and the horse needed to produce more overstep in the second extended trot. Don Johnson visibly struggled to find the rhythm in the first piaffe. The horse had two hooves overtrack in the extended walk and Werth rode a good collected walk. The second piaffe was better, even though it travelled forward. Isabell cranked her score up with good canter work. The two tempi changes were good, the extended canter big but there was not enough ground cover in the one tempi's (still a 7.6 average score for the movement!). The pirouettes were very small, but the horse could have been more bent in the body and circled round Werth's inside leg (score 7.8!).  The final centerline had a good rhythm. German judge Plewa had the high score (77.447%) and French judge Judet was the lowest (71.596%).

German team mate Fabienne Lutkemeier is currently ranking second with 73.237%. Aboard her 13-year old Hanoverian gelding D'Agostino (by De Niro x Shogun xx) the new comer on the team excelled in the trot half passes, regular passage, trot and canter extensions as well as the tempi changes. Neither the begin or end halt was immobile and the chestnut gelding dragged his feeth in the rein back (score 6.9). D'Agostino has very strong basic gaits with much ground cover and a graceful use of the front leg but his weak point is the piaffe. While he can keep a steady rhythm in them, the silhouette is far from the ideal. The horse breaks in front, doesn't sit behind and just paints a very unattractive picture. Still, Lutkemeier gets the most out of her horse, who is always nice and up in the bridle, though at times the nose could be an inch more out. The duo got 75.957% as high score (Verbeek) and 70.851% as low score (Tornblad). 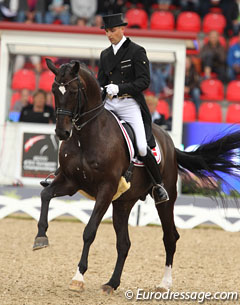 Denmark's hopeful for a surprise, Andreas Helgstrand and his limitless Akeem Foldager (by Akinos x Loran), was unable to chunk in that coveted 75% + score to contribute for a high team ranking.  The pair had highs and lows in their test. The impressive dark bay Danish warmblood gelding executed super trot extensions and wonderful half passes. The first passage was big but there was a slight loss of impulsion in the piaffe which meddled with the regularity. In the extended walk the horse could have produced more overtrack and dropped the neck more. The second piaffe was outstanding but the transition from passage to canter was hiccupy. In the several months Helgstrand has been riding Akeem, he has not yet been able to solve all the issues in the canter and it shows that the pair has not yet gelled into a solid combination. One of the changes in the two tempi's was not through and the horse changes shorter to the right than to the left. The same happened in the ones. The pirouette right was slightly big but the horse did show improvement in stride control. The final centerline of piaffe and passage was not entirely straight in the body but good in rhythm and scope. They finished on 72.720% with 75.532% as high score (Plewa) and 70.426% as low score (Svalling). 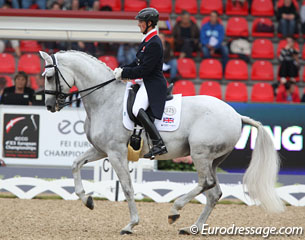 Will Great Britain be able to continue its winning streak, which it initiated its claim on team gold at the 2011 European Championships in Rotterdam and which culminated at the 2012 Olympic Games? This is the biggest question at the show. When fourth rider Gareth Hughes and Danish bred mare Nadonna (by Donnerschlag) left the arena, their leg room was reduced from First class to economy. Hughes had his hands full managing the temperamental liver chestnut mare, whose lid blew off the cooker and who was tense from nose to tail and from start to finish in her Grand Prix (score 60.866%). Fortunately team new comer Michael Eilberg kept his cool on the British Hanoverian bred mare Half Moon Delphi (by Dimaggio x West Wall) and finished fourth so far with 72.264%. The grey dame executed big but conservative trot extensions and she travelled well in the half passes, though in the left one the hind quarters should follow more. She was slightly restless with her head in the extended walk and should have been more closed in the frame in the collected. Delphi has amazing air-time in the passage and the piaffe is absolutely lovely with much sit behind but she could have jumped on the diagonals a bit more actively. The zig zag was beautiful and the tempi changes well ridden. Overall it was a very soft and harmonious presentation, that unfortunately suffered from a lesser walk. The pair scored 72.264% but that could easily have been higher. Her high score was 75.638% (Judet) and her low score showed a dramatic drop to 65.532% (Svalling). 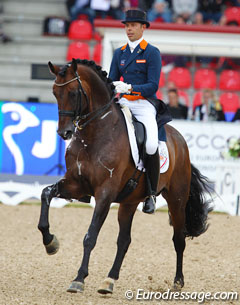 Dutch Hans Peter Minderhoud overtook team mate Danielle Heijkoop in the ranking and finished fifth provisionally with 71.353%. Heijkoop and Siro (by Gribaldi x Hemmingway) are the benjamins on the team but they have been the consistent third highest scoring Dutch pair this season. In Herning the pieces didn't all fall together and Heijkoop made an unusual string of mistakes added to the fact that the passage, normally a highlight of the horse, was quite irregular today. They posted a score of 70.228% (7th) so it was up to Minderhoud to save the day for The Netherlands. Aboard the gorgeous Oldenburg licensed stallion Romanov (by Rohdiamant x Grundstein II) Minderhoud did not make any major mistakes, but there were quite a few beauty mistakes that needed polishing. The trot extensions and half passes were impressive but the stallion dragged his feet in the rein back. All three piaffes were pretty and rhythmical but the passage was not always as even with more activity from the right hind leg. Throughout the test the stallion opened his lips and showed his tongue on the right side. The tempi changes were big but not straight. The pirouettes were good, but the onset of the left one was crooked.