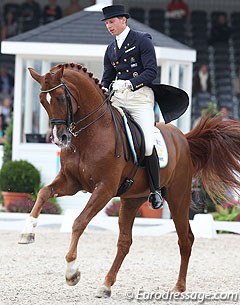 Patrik Kittel has withdrawn his 2011 European kur bronze medal winning ride Scandic from competing on the Swedish team at the 2013 European Dressage Championships in Herning, Denmark, which are set to begin with the vet check tomorrow Tuesday 20 August 2013. Kittel will be replacing Scandic with his second horse Toy Story.

Kittel had a good first warm-up in Herning, testing the arena on Monday morning during the official training sessions. There were no signs of fitness issues at the time. A few hours later, the 14-year old Dutch warmblood stallion (by Solos Carex x Amiral) was moved to another bow for a grooming session and his groom noticed the horse was not sound on his right front leg.

Swedish team veterinarian Jonas Tornell examined the horse and supervised by the official FEI vet, an ultra sound was carried out. They  discovered a small bleeding on the carpal channel. It is not a serious injury but the horse would not have a chance to be sound before tomorrow morning's vet check, which starts at 9.30 AM.

Swedish chef d'equipe Bo Jenå commented, "I immediately thought about Toy Story as our reserve and the decision was made to transport him from Germany as soon as possible. The lorry drive is about six to seven hours up from Germany to Herning and Toy Story will be here in time for the vet check. Patrik took the situation professionally, these things happen with horses, there is never any guarantee but now he needs to rethink his strategy on how to work with Toy Story."