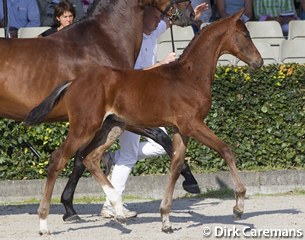 Islero was named winner of the 2013 KWPN Foal Championship for dressage bred foals at the 2013 KWPN Horse Days in Eremelo, The Netherlands, on Friday 16 August 2013.

Apache offspring dominated the 2013 KWPN Foal Championship for dressage foals with the top three all being his descendents. It was also remarkable that none of the foals had Jazz as sire nor grand sire, whereas the 3-year old Mare Championship was still dominated by Holland's most successful dressage sire ever, Jazz.

The champion colt is bred by S. Snijders, owned by Snijders and H. Westervelt, and is by Apache x Sandreo. Judge Toine Hoefs commented that "Islero stood out with his good walk and elasticity. He's an incredibly charming foal."