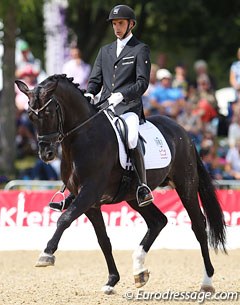 Two much talked about young dressage horses were withdrawn from competing in the 6-year old consolation finals at the 2013 World Championships for Young Dressage Horses in Verden, Germany, on Saturday morning 10 August 2013. Charmeur was withdrawn because of an overworked schedule, Danish candidate Mollegardens Pas Partout also scratched due to fitness issues.

In the 6-year old preliminary test Andreas Helgstrand andthe black stallion Mollegardens Pas Partout (by Don Primero x Bogelys Camaro) finished 31st with an average of 6.68. The black stallion, bred by Lone Christiansen and owned by the Norwegian Tailormade Horses, is a spectacular mover in trot but Helgstrand rode the 6-year old in a Grand Prix frame, with the collected trot being more a passage. He struggled to find regularlity in the gait as several steps were passage, then there were a few more forwards steps with the horse jerking with the hind legs to find an even stride. The judges down scored the trot to a 5.8.

Helgstrand decided not to campaign the stallion in the 6-year old small finals and cited fitness issues as the reason for withdrawal on Ridehesten.