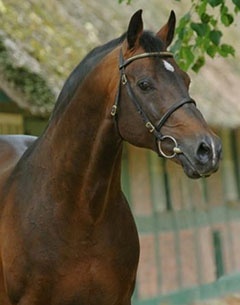 The Holsteiner licensing champion Lancer II (by Landgraf I x Fantus x Matador) has passed away a few weeks ago at his home stable in Thuringia, Germany, at age 27.

Bred by Hans Werner Höpcke, Lancer II was the champion of the 1988 Holsteiner Stallion Licensing in Neumunster but produced a mediocre Stallion Performance Test in Adelheidsdorf in 1989. He scored only 107.83 points in total and finished 25th out of 66 participating stallions. She scored 104.40 points for dressage and 117.25 points for show jumping. Lancer II was never competed!

Lancer II has stood at a plethora of stallion stations and moved from one place to the other his entire life. He initially stood up for stud for the Holsteiner verband in Marne in 1989, then moved to Kattrepel in 1990 and covered at Georg Hoogen's Vogelsanghof in Kevelaer from1991 to 1999. Between 2000 and 2003 he was stationed at Gross Buchwald and Siethwende, then was in Spain for two years but returned to Germany for two seasons. In 2008 he was leased to a Luxembourg station. Lancer II still stood up for stud last year at age 26 stationed at Gunter Hoffmann's yard in Grosskochberg, Germany.