Parzival Not to Compete at 2013 Dutch Dressage Championships 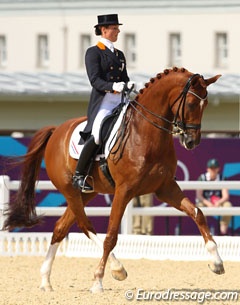 Adelinde Cornelissen and Parzival will not be competing at the 2013 Dutch Dressage Championships, which are a mandatory observation trial for Dutch team selection for the 2013 European Championships in Herning at the end of August.

Parzival was recently operated on for cardiac arrhythmia at an equine clinic in Belgium at the beginning of June and has only been back in training for one week. The 2013 Dutch Championships take place this weekend in Hoofddorp, The Netherlands.

"It is all about Parzival's welfare and a responsible and gradual build-up in training is now priority," said Dutch team trainer Wim Ernes. "Parzival had his last check-up with Dr. Van Loon in Ghent Monday last week. I'm happy that he's healthy again and back in training.

Dutch team vet Jan Greve added that it won't take long for Parzival to be back in top condition. "We'll see where we'll be at and if the European Championships are feasible. With Parzival's performance record, experience and technical ability, participation in Herning at the end of next month is realistic," Ernes explained.

Last year before the 2012 Olympic Games, a similar scenario took place with Parzival. The Dutch warmblood gelding (by Jazz x Ulft) got injured after the 2012 World Cup Finals and received a by from the Dutch Federation to compete at any of the obligatory selection trials. Parzival returned to the show ring for the first time at the Games  and won individual silver.