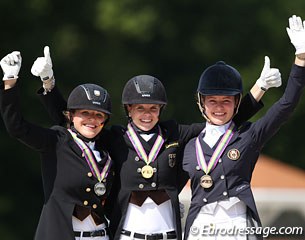 Johanne Pauline von Danwitz outclassed her competition once again aboard the gorgeous Hanoverian gelding Habitus (by Hohenstein x Weltmeyer) and left her rivals far behind her. The kur silver went deservedly to a strongly and accurately riding Anna Christina Abbelen on Furst on Tour (by Furst Heinrich), whereas Norwegian Alexandra Andresen remained consistent with her Westfalian stallion Belamour (by Belissimo M x Lord Sinclair) and won bronze. 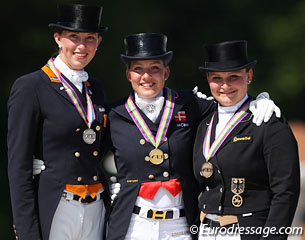 In the Young Riders category it was a battle of the bulge between Danish Cathrine Dufour, the 2012 European Young Rider Champion, and Dutch Stephanie Kooijman. Whereas Kooijman went for power and expression, Dufour excelled with elegance. The latter reclaimed kur gold, Kooijman settled for silver and the bronze went to Juliette Piotrowski on Sir Diamond.

Full reports of the Young Riders Individual Test and both Kur Finals with tons and tons of photos are coming up in the next few days as I catch up on work, organizing photos, posting scores. 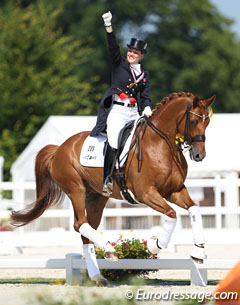